"American Hero (Part 1)" is the twenty-second chapter of the Yu-Gi-Oh! manga.

Tomoya Hanasaki invites Yugi and his friends over to see his Zombire collection. After they leave Hanasaki takes his Zombire obsession too far.

The illustration for the cards "Zombyra the Dark" and "A Hero Emerges" are taken from scenes in this chapter.

Yugi, Jonouchi, Anzu and Honda are fascinated as they read Tomoya Hanasaki's Zombire comics. Anzu asks why all American comics are full of macho bodybuilders. Hanasaki is offended by this, prompting him to immediately deny that Zombire is like that and passionately explains Zombire's story; He was once the god of death, before learning to love and started to fight evil; but this causes his face to rot, like a zombie and shorten his life; but he still fights evil. Hanasaki proudly yells out that that is why he is the greatest hero ever.

Yugi and Jonouchi give him an odd, look as Hanasaki realizes he is after getting carried away. He apologizes, but Jonouchi says that it is okay; it shows how much he likes Zombire. Yugi mentions how the Kame Game is quickly selling loads of imported Zombire action figures. Hanasaki invites the four of them to his house to show them his collection, to which they all immediately agree. 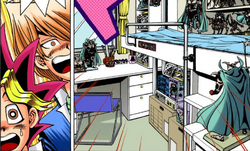 Hanasaki shows his friends his room.

The five friends enter Hanasaki's room, which is loaded with Zombire merchandise. Hanasaki explains how his father works in America and brings him home Zombire stuff, whenever he returns to Japan.

Mr. Hanasaki, with the Zombire mask

Hanasaki's mother enters the room, with Tea and Zombire snacks. She announces that Hanasaki has another surprise visitor. A man in a Zombire mask emerges fro behind her, causing Jonouchi and Yugi's tea to pour out of their dropped jaws. Hanasaki identifies the man to be his father and rushes to meet him. Mr. Hanasaki gives him the mask, happy that he likes it.

Hanasaki invites his friends to help themselves to the snacks, as he slips out to try on a costume. Jonouchi remarks how the whole family is gone crazy, before spotting an incomplete garage kit. He manages to assemble the figure, before Hanasaki returns to the room.

Hanasaki enters the room, in costume, pointing to the figure and letting out a wail, frightening Yugi and Jonouchi. He tells them that he had wanted to keep the figure in its original box. Honda points out that crying is out of character in that costume.

As the gang leave, the Hanasaki family says their goodbyes and return to the house. Hanasakias father stays back and requests that the stay friends with Hanasaki. He had been worrying that Hanasakias action figures were his only friends. Yugi assures him that they will always be friends and Jonouchi tells him that Hanasaki is not as fragile as he thinks he is.

Hanasaki is visited by his father in hospital. His father hands him a Zombie figure, telling him that this is Zombire and he is the strongest hero in America. Holding the figure, Hanasaki feels stronger too. His father is delighted to hear this and promises to bring him more Zombire toys and figures every time he returns from America. 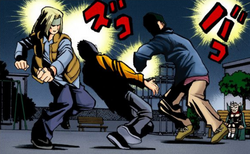 Hanasaki spots someone being mugged.

Hanasaki, still dressed as Zombire, poses in his room. He decides to go out dressed like this. As he sneaks out his bedroom window, his father spots him. 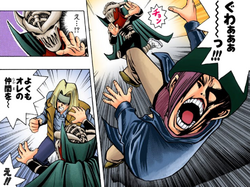 Hanasaki fends off the delinquents, to his surprise.

Hanasaki parades around the park, before dropping onto a bench. He then spots someone being attacked by two others. He initially decides to leave, but reconsiders as he notes that Zombire would not run away at a time like this.

He approaches the attackers and demands that they leave the victim alone. The two proceed to attack Hanasaki in turn. He flinches each time, but fins the two guys fall back as if they have taken a powerful blow each time. The two guys run away, as Hanasaki calls after them that he is Zombire.

Hanasaki's father meets up the three other guys from the fight and pays them 100,000 yen for their act, believing that this service will give his son more confidence. He asks the guys if they can do it again.

After school, the two boys, who pretended to be beaten by Hanasaki the previous night come up to Yugi and ask if he knows Hanasaki. Yugi plays dumb and pretends not to know him.

Hanasaki spots them and is surprised that they are still picking on people after he taught them a lesson last night. He then decides to step in and protect Yugi.