The alleged psychic Kokurano has gained great popularity at Domino High School. However Yugi Mutou is skeptical of his powers and upset by Kokurano's interest in Anzu Mazaki.

On the way to school, Katsuya Jonouchi tells Yugi, how his luck has been down lately. He says he clobbered four punks in a fight, but that he took a punch.

At school Anzu tells them about the psychic in their school, Kokurano, and that they say his predictions are really accurate. All the girls who have disappearing at recess have been going to get their fortunes took, Anzu explains, but she is not into that stuff herself. Jonouchi however is fired up on hearing this. His face glistens at the thought of getting his fortune read. Ignoring any objections, he forcefully grabs Anzu and Yugi rushing out to meet Kokurano.

They arrive at a classroom, packed with people. Jonouchi notices nearly everyone there is a girl. Afraid of damaging his pride, he shouts out "Geez! I can't believe you dragged me here, Anzu!" Caught between fury and shock Anzu yells back "What?! Who dragged who here?!!" One of Kokurano's attendants shouts at them to keep quiet, as their negative energy is disrupting Kokurano's concentration.

One girl is told her fortune, that as long as she does not die, she will continue to live. Oblivious to the lack of any actual future being told, bar the obvious, she is easily infatuated.

When the trio are next in line, Jonouchi prompts Anzu to get her fortune told. As she objects, the room suddenly shakes as an earthquake occurs. Kokurano then quotes Jonouchi, that he had said "get your fortune told". He tells Jonouchi that he is no fortune teller. Unlike other methods such as astrology and palm reading, which are only effective because they rely on statistics, he sees clear visions of the future. He then hands Jonouchi a slip of paper, he had wrote something on earlier, and asks him to read it out loud for everyone to hear. Jonouchi reads the slip, saying "Earthquake today". The whole room applauds.

Now impressed Anzu slides forward, saying that maybe she will get her fortune told after all. Kokurano begins to feel her hand. This enrages Yugi. Kokurano himself feels privileged, having admired Anzu for so long. He looks at his two attendants, thinking they are beginning to bore him and that he can seduce Anzu by using his powers. Kokurano tells her that she will see a wonderful man, already close to her. She will fall so deeply in love, that she will swoon before him. Anzu's thoughts melt, as she wonders if it could be the man who saved her.

Yugi says he hates to be rude, but he has the feeling most psychics are fake. One of the attendants quickly shafts Yugi for his disbelief in Kokurano, reminding him that Kokurano just predicted the earthquake. Yugi says that he saw a trick like it on TV. If Kokurano wrote "Earthquake today" along with other predictions, that would not be a real prediction. Kokurano begins to wave his arms frantically as he predicts Yugi's future, "Countless letters will fall from the heavens and bring disaster upon you".

Back in the classroom, Yugi is feeling down about the prediction. Jonouchi tries to cheer him up, insisting Kokurano's predictions are useless, but Anzu says she's heard a rumor of of how Kokurano's powers came to be famous. He predicting a fire at a student's house 3 days before it happened. The student survived, but is still in hospital. That clenches it for Jonouchi, who is now convinced that Kokurano really is psychic. However Yugi still does not believe it, but wonders what "countless letters" could mean.

After school, as Yugi packs his bag, he recalls how Anzu does not have work today and promised to go shopping with him on the way home. He spots a library book, that is due today, inside someone's desk. Suspecting someone forgot to return it, he decides to take it to the library, before Anzu arrives. Unbeknownst to Yugi, Kokurano watches him as he makes his way there. 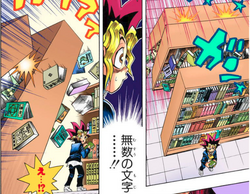 The bookshelves knocked at Yugi

Inside the library, Yugi finds the book's place on its shelf. Suddenly the shelves behind Yugi come crashing down, just as he realizes what was meant by "countless letters". The Millennium Puzzle lights-up and once the shelves are done falling, Dark Yugi is left standing. He thinks had it taken him any longer to figure out "countless letters", he would be dead, but now he knows Kokurano is a menace, who makes his predictions come true. If that is the case, he realizes Anzu is in danger.

Back at the classroom, Anzu is wondering what is keeping Yugi. She had been planning on taking him out for a treat, as she got paid today. Meanwhile outside, Kokurano watches her as he unscrews a bottle of chloroform, thinking the future he predicted is about to come true. 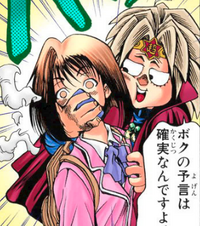 Kokurano knocks Anzu out with chloroform.

Kokurano enters the classroom and tells Anzu the person she is waiting for will not come, but predicts someone even more wonderful will come. He asks if she remembers his prediction, but Anzu cannot believe that Yugi will not come. Kokurano suddenly presses some chloroform against Anzu's mouth, saying his predictions are infallible. Anzu passes out and as Kokurano lays her down, he points out that she swooned before him, as he predicted. Raising his arms in triumph, he laughs that as long as he has his powers any woman shall be his and he will be popular forever. He hears someone ask "You think so?" and turns to find Yugi.

Dark Yugi tells Kokurano his prediction failed and imposes a game. Should Dark Yugi lose; he would acknowledge Kokurano's powers. Barely awake on the floor, Anzu hears him say "Let's play a game" and realizes that whoever just came in is the man who saved her last time. She tries to get a look at his face, but falls asleep, before she can get a clear image.

Dark Yugi holds up the bottle of chloroform that Kokurano left behind or deliberately left it forseeing they would use it in this game, he jokes. Dark Yugi places the bottle on top of some sheets of paper on top of a table. The rules of the game, Paper Crash!, are that two players should each take turns pulling 1 sheet at a time out from under the bottle, without touching the bottle. Whoever lets the bottle fall loses.

Kokurano laughs that he has already won and can see Yugi snoring on the floor. The two ro-sham-bo to decide who goes first. Dark Yugi takes the first move. He whips the sheet out from under the bottle, causing it to wobble, but settles down without falling. Kokurano goes second and produces similar results, but leaves the bottle closer to the edge of the table. Dark Yugi goes again and his move leaves the bottle, half over the edge.

Dark Yugi asks Kokurano what he will do now, as he will not be able to yank out a page. The only way to remove one is to levitate the bottle first, which Kokurano should be able to do if he is psychic. Kokurano decides to try that and show Dark Yugi his power. He starts to concentrate on the bottle and begins to strain. He starts to see the bottle floating and grabs a piece of paper. He laughs that he has managed to get the bottle to levitate. However Dark Yugi tells him it is just his imagination and invites him to pull the piece of paper and prove everything. Kokurano laughs that it cannot be his imagination and pulls at the paper, causing the bottle to fall and break. The chloroform escapes and causes him to faint. 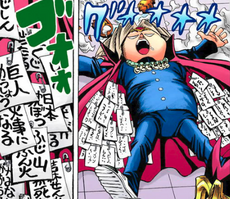 Kokurano's powers are exposed as being fake.

Dark Yugi looks down at him and says that anyone can be a psychic in their imagination, but it takes courage to recognize when you have been pushed to your limit, but Kokurano did not have that courage.

With Kokurano lying on the floor with his cloak spread out, Dark Yugi can now see notes containing various possible future events, which Kokurano may pass off as predictions should they come true. Dark Yugi thinks that Kokurano should not wake-up until tomorrow, by which time everyone in school should know the truth about his predictions. He then collects Anzu, saying "and over here, we have a sleeping beauty".

Episode 13 of the Toei anime is based on this chapter.