"Digital Pet Duel" is the twentieth chapter of the Yu-Gi-Oh! manga.

Digital Pets have become popular at Domino High School. Kujirada, who believes himself to have the ultimate pet, ends up in conflict, with Yugi, his friends and their pets.

Yugi narrates that keychain games are really popular at his school right now.

A girl in front of him says that she forget to clean her pet's "poop" and it died. Her companion says that that is too bad. You have to clean-up after them every day.

Yugi continues that Digital Pets are the most popular out of these games. They are simulation games, where you raise a creature on a miniature LCD screen.

In class, Anzu, Jonouchi and Honda gather around Yugi's desk. Jonouchi and Yugi ask how each others Digital Pets are doing. They admire Yugi's pet, who looks just like Yugi. Yugi says that he has named him U2. Yugi remarks that it is strange that although this is just a game, one can get really attached to their pet. Yugi asks to see Jonouchi's pet. Jonouchi holds up his pet. Honda, Anzu and Yugi all make strange faces and Anzu says that it is so ugly. Jonouchi tells them to shut up, causing Honda to comment that it has got Jonouchi's bad attitude.

Yugi mentions that it is said, that you transfer your personality to your pet, depending on how you take care of it. With the thousands of different creature types, Yugi says that there can be an infinite number of pets, all of which are unique.

Yugi asks Honda if he has a Digital Pet. It is not his thing, Honda replies, he has got a dog at home, so he is too busy taking care of real pets to have time for digital ones. His dog just came into heat and has been driving him nuts. That is one thing you do not have to worry about with Digital Pets, he adds.

Jonouchi gets excited when Yugi explains how pets can mate to share each others personality data. Jonouchi suggests that he and Yugi "mate right away". Honda remarks that he did not need to hear that. Yugi and Jonouchi connect their pets. U2 is pretty wild, so Yugi hopes that he gets some of Jonouchi's wild personality. The two pets look at each other and Jonouchi's pet walks into U2's screen, where he gives U2 a kick. The gang gasp in surprise and call it a bully. Anzu comments that the pet is just like Jonouchi. Jonouchi is ashamed of his pet and Yugi thinks that this may have been a bad idea. However the two pets start to get along and a noise is made to indicate that the transfer is complete. Jonouchi's pet moves back to his screen and Yugi and Jonouchi disconnect their pets.

Jonouchi looks down at his pet, thinking that he needs to get some of U2's cuteness. Yugi looks at U2 and asks what kind of data, he got from Jonouchi. Inside the device, a 3D version of U2, looks up at Yugi thinking that this is his master.

U2 starts acting scared as Kujirada approaches the group to show them his Digital Pet. Kujirada boasts that his pet is different from their ordinary pets. Jonouchi asks what makes Kujirada's pet different, jokingly asking if it is a thoroughbred. Kujirada goes on to explain about Hidden Characters. These are a rare kind of pet, with probability one in a million, he says and that they are said to exist due to a glitch or virus, but nobody knows for sure. Depending on how they are disciplined, fed, etc. they become a Hidden Character when everything is just right and he has one of these Hidden Characters.

Jonouchi hates to admit it, but he would like to see. Yugi asks if they can look and Kujirada holds up his pet. Yugi and Anzu make unpleasant faces, while Jonouchi sniggers that it is uglier than his pet. Jonouchi asks how Kujirada knows that it is a Hidden Character; the ultimate pet. Kujirada diverts their attention to the star in its graphics, explaining that it a trait that all Hidden Characters have.

Normal pets do not live longer than 21 days, Kujirada explains, however his has been alive for 2 months already and calls it the ultimate pet again. Nonetheless Anzu maintains that all pets are special while they last. She does not think that his is so great, just because it can live longer. Kujirada smirks that she is just jealous.

U2 starts to beep and Yugi looks at him, wondering why he has been acting so afraid. 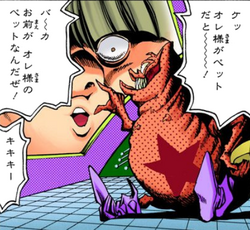 At Kujirada's house, Kujirada is woken during the night, by his pet, making noise indicating that it needs food. Kujirada mumbles that he just fed it five minutes ago and that he cannot sleep like this.

He gives the pet food and realizes that he is even bigger than before. Kujirada is impressed by the rate it is growing.

Inside the the device, the 3-dimensional pet says that he is tired of eating pet food all the time. Kujirada looks at the pet, asking if it just spoke. He says that it is impossible as Digital Pets can only beep. The pet tells him off for calling him a pet. He points at Kujirada, saying "Fool! You are the one who's the pet!" He orders Kujirada to bring him more food, so that he will live longer and Kujirada will become famous because of him.

At school, Jonouchi is horrified to find his pet's data is all gone. He tells Yugi that he left the room for a moment and his pet disappeared and shows him the blank screen.

Elsewhere Kujirada laughs, having just fed Jonouchi's pet to his own. Kujirada's pet finds that other pets are more delicious than he thought. Although he just ate, he feels hungry again. He calls Kujirada and has a hypnotic effect on him, as he demands more food. 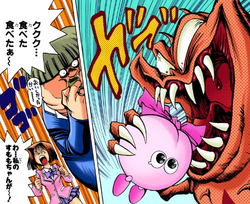 Kujirada asks Anzu for her pet for a while. She refuses, but Kujirada snatches it from her and connects it with his pet. Inside the connected devices, Kujirada's pet grabs Anzu's pet, Peachy, and shoves her into his mouth, causing Anzu to wail out loud.

Yugi saw what happened and Kujirada's pet demanded more food. Kujirada swipes U2 from Yugi and connects it to his pet, laughing that U2 should rejoice as he is about to become part of his ultimate pet. 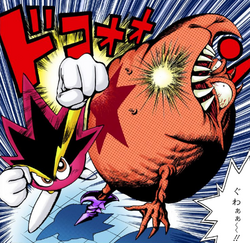 The powered-up U2 beats Kujirada's pet.

Inside the devices, U2 runs from the other pet. Despite its size, Kujirada's pet is fast and manages to catch U2. He tries to eat him, however U2's device makes a sound, indicating that it is about to grow. U2 changes to a form, resembling Dark Yugi. Kujirada's pet senses great power, before being punched by the powered-up U2.

Yugi, Jonouchi and Anzu are impressed with U2 defeating the other pet. Yugi realizes that U2 must have incorporated the data it received from Jonouchi's pet. Kujirada is stunned to see his pet beaten, but on the bright side, he sees that should at least be able to sleep.

At night, Yugi watches U2, thinking that all good things must come to an end. According to U2's programming, he will disappear in the morning. Yugi tells U2 that he can eat as much as he wants and asks if he can watch him until morning, before saying goodbye.

Yu-Gi-Oh! (Toei) episode 0077: "The Underhanded Digital Pet Rebellion" is based on this chapter.