"Arena #2" is the thirty-fourth chapter of the Yu-Gi-Oh! manga.

As Yugi, Jonouchi and Anzu grieve over the loss of Honda, Yugi admits to thinking there is another Yugi inside him, before advancing to face Mokuba in the next stage of Death-T. 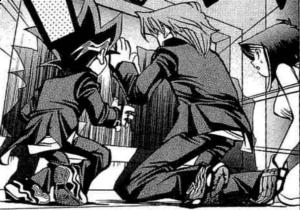 Jonouchi tries to communicate with Honda.

Honda is after getting trapped in the room of falling cubes. At the opposite side of the now blocked exit, Yugi, Jonouchi and Anzu are in a state of shock, while Johji is fast asleep. Yugi starts repeating "Honda is...". Jonouchi refuses to believe Honda is gone and says that you can't get rid of that idiot so easily. Mad over what happened to Honda and his grandfather, Yugi curses Kaiba and starts to blame himself. Anzu tries to comfort Yugi, saying that she's sure Honda is alright.

Jonouchi yells back into the room that they are going to go on ahead and instructs Honda to use his large head to get out of his fix. He stands up and asks Yugi and Anzu to get going, but Anzu informs him that Yugi is acting strange.

In his control room, Seto Kaiba compares Death-T to chess; Yugi is the king, Jonouchi is the knight and Honda must be the rook. He knocks over the rook piece on his chessboard, as it is captured, and says "The countdown to checkmate has begun". 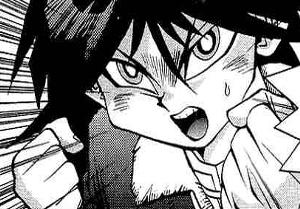 Mokuba gets mad over Seto betting against him.

Mokuba enters the room, wearing a robe, and comments that Yugi and his friends don't give up easy. Now that they are almost at the final stage, he reminds Seto of the bet they made before Death-T. They bet on which stage of the theme park Yugi would die on. Seto had bet that he would die on Death T-5, while Mokuba bet Death T-4. Mokuba calls Seto a jerk, since Death T-4 is the stage, where Mokuba faces Yugi. Kaiba is aware and says that he bet on the final stage, Death T-5, the final game of Duel Monsters. Mokuba retorts that Seto knows what he is talking about; Seto bet on Yugi rather than his own brother for the next stage. He asks Seto how he thinks that feels. Seto says that he still feels the same. He doesn't believe that Mokuba can beat Yugi and apposed Mokuba's participation from the beginning.

Seto reminds Mokuba that he tried to show him up by challenging Yugi to a game before and suggests that he knows the outcome of that game. Mokuba starts to sweat and hangs his head. He says that he just thought that Seto would like him if he beat Yugi. Seto turns to Mokuba and yells at him that there is no such thing as brotherly love in the gaming world and until he figures that out, he will always be a loser.

Mokuba gulps and protests that he will show Seto, by beating Yugi himself. He turns to Saruwatari and another suit and asks if the preparations for Death T-4 are ready. They affirm this and Mokuba storms off, ready to show his brother what a gamer he is. 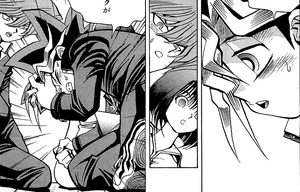 Yugi tells Jonouchi and Anzu about the other Yugi.

Anzu and Jonouchi notice that something is wrong with Yugi. (In the English version, Jonouchi asks if he needs his insulin.) Yugi claims that there is something inside of him that he can't hold back. Anzu says that its okay, he's just tired from the stress. Yugi insists that that is not it and there is something that he has been keeping secret from them. He thinks that there is another Yugi inside him, that he doesn't know about. Anzu and Jonouchi are both astonished. Yugi continues that ever since he solved the Millennium Puzzle, there has been times where he blacks out and changes into someone that he doesn't know about. He admits to being afraid. After finally becoming friends with them, Yugi was afraid that if they knew about the other Yugi, they might leave him. However, Jonouchi promises Yugi that they will always be friends, even if there is someone else inside him. Anzu agrees and the three of them, along with Johji get moving. 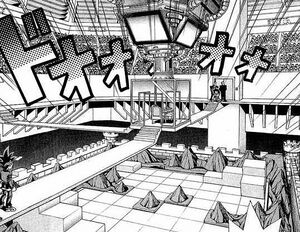 The arena for Death T-4.

They run through a door and are greeted by a cheering audience as they enter a place called the Second Arena. The arena contains a Battle Box suspended over a battlefield. At the opposite side of the arena, Mokuba welcomes Yugi to Death T-4, his stage.

Mokuba says that this is a battle between him and Yugi and orders Yugi to leave his friends where they are and face him in the Battle Box alone. Yugi's friends insist that it is too dangerous to go alone and Jonouchi offers to go with him. However, Yugi insists that they should let him go alone. He's not a weakling anymore, he says, and that he is not alone, as has his friends no matter where they are. He thanks Jonouchi and Honda for teaching him what real courage is and decides not to be afraid of the other him anymore.

As Yugi makes his way into the Battle Box, people in the crowd call him "the loser who's going up against Mokuba" and say that there is no way he can win.

At the Battle Box, Mokuba congratulates Yugi on making it this far, but insists unfortunately for Yugi everything up to now has just been warm-up. Yugi doesn't see Mokuba as much of an obstacle and asks if he didn't learn his lesson last time. Mokuba tells Yugi that the last stage he is trying to get to will be against his brother, Seto, and is up the elevator across from them. Yugi guesses that he must beat Mokuba to get to it, but Mokuba laughs that he doesn't stand a chance. He points his finger and says that Yugi is going to die on this stage, along with his friends. Yugi looks back and sees that Kaiba's guards are holding Jonouchi and Anzu at gunpoint. Yugi panics and calls back to them, wile Mokuba laughs. Jonouchi tells Yugi not to worry about them and just "Kick [Mokuba's] but at his own game". 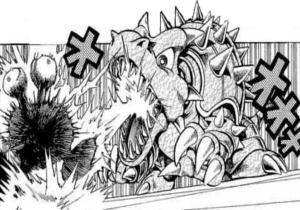 Mokuba decides to get the game underway and says that they will be playing Capsule Monster Chess, the virtual reality version. They will play CapMon on the board in front of them, but holograms of the battle will be shown in the field below them.

Mokuba gives a demonstration. He takes a strong piece, "Armorsaurus", saying its like him, and weak piece "Hyumoko", saying it's like Yugi. He puts the two monsters on the board, causing their holograms to appear on the field below them. He gets them to fight; "Armorsaurus" attacks "Hyumoko", incinerating it. Mokuba laughs that he will destroy Yugi, just like that weak monster.

Before they begin, Mokuba notes that the loser will play a Penalty Game, the "Experience of Death".

The game begins and Mokuba thinks to himself that he will beat Yugi and show his brother. Yugi believes that he has to win and face Kaiba in the final stage and asks Grandpa to wait for him.

As with the rest of Death-T, Johji was not present in the anime, but Miho Nosaka was.