"Millennium Enemy 4: Role-Playing Miniatures" is the fifty-third chapter of the Yu-Gi-Oh! manga.

Dark Bakura continues to seal more of his opponents' souls in miniatures, as they play Monster World.

Anzu has just fallen unconscious while playing Monster World. Yugi, Jonouchi and Honda rush to check on her, while Dark Bakura laughs silently to himself. Yugi suspects something and shouts at Dark Bakura, asking what he did to Anzu. Dark Bakura innocently says that he's the Game Master and just followed the rules to keep the game going. However he adds that the game they are playing right now is the ultimate role-playing game. Yugi, Jonouchi and Honda look at him in shock and wonder what this means. Dark Bakura reminds them that he said in role-playing games you have to become the characters and elaborates that you transcend reality to become the people of an imaginary world and live the adventure that unfolds. Not seeing the relevance, Jonouchi reminds him that they are asking what he did to Anzu. Dark Bakura tells them to worry as Anzu is alive, but in Monster World. 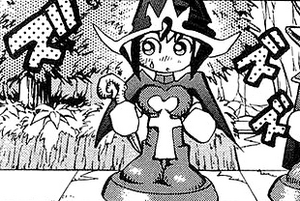 Anzu awakens in her miniature.

On the game board, Anzu has just awoken embodied in her miniature. She looks around and wonders what's going on. She spots the others and asks why they are so big. She then looks at herself and realizes that she has been turned into a miniature. Yugi hears Anzu's miniature screaming and realizes that he wasn't hearing things when he thought he heard a miniature speak earlier. Jonouchi says that it screamed in Anzu's voice. Anzu asks her friends to help and they then also realize that she has become a miniature.

Dark Bakura explains that like he said, a player's fate is determined by the roll of the dice; If the Dark Master Zorc rolls a super critical 00 or a player rolls a fumble 99, the player's soul is sealed in a figurine by the power of darkness and the only way to retrieve the soul is to defeat Dark Master Zorc. 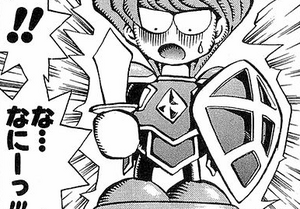 Jonouchi awakens in his miniature.

Jonouchi gets angry and rolls the dice vowing to defeat Zorc. However he rolls a 99. Dark Bakura points out that aside from getting the worst possible roll, it wasn't even Jonouchi's turn. He says that rolling the dice without the master's permission is breaking the rules of the game and seals Jonouchi in his miniature.

Yugi gets angry, but Dark Bakura advises him to think before he acts because if he and Honda also become miniatures there won't be anyone left on their side to roll the dice. This would mean that they automatically lose and the four of them would be trapped in this world until the next time he uses them in a game. Anzu and Jonouchi say that they have no choice but to fight and ask Yugi to roll in their place.

The game continues and its Honda's turn. Dark Bakura warns him that he might become frozen in fear by Zorc's powerful aura. Dark Bakura checks Honda's character's courage score and calculates that Honda must roll less than 70 to conquer his fear and go first. However if he rolls higher, Zorc will make the first attack. Honda rolls a 94 and calls it stupid because he isn't really afraid of Zorc. Dark Bakura laughs and says that there is no "you", only "your character". He narrates that the magic gunman is frozen in fear and curses his cowardice. 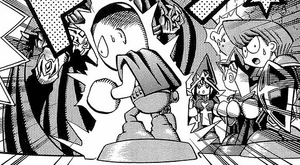 Honda awakens in his miniature.

Zorc takes the initiative and Dark Bakura rolls a super critical 00. Yugi is shocked to see Dark Bakura roll two super criticals in a row and accuses him of doing something to the dice. Dark Bakura simply replies that the dice don't lie and Honda is then sealed in his miniature. Honda curses what happened and again insists that he wasn't afraid.

With Anzu, Jonouchi and Honda all sealed in miniatures, Dark Bakura tells Yugi that he is the only one left and must roll the dice and move all the pieces by himself. He also explains that if a character's hit points reach 0 they will die and not just in the game, but in the real world. Yugi's friends tell him he can do it and beat Zorc. 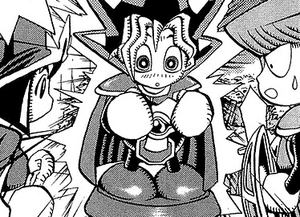 Yugi awakens in his miniature.

The battle continues and Honda's gunman has a chance to attack Zorc. Dark Bakura tells Yugi to go ahead and throw the dice. However Yugi insists that before that, his soul is to also be transferred to his miniature. The others are surprised, but Yugi insists that he wants to fight together with his friends on the board and if they are putting their lives the line, he should do the same. Bakura says that he could grant that wish, but asks who would then throw Yugi's dice. Yugi silently thinks "the other me". Since the Game Master is supposed to be of service to the players, Dark Bakura agrees to do it and has Yugi's soul sealed in his miniature. 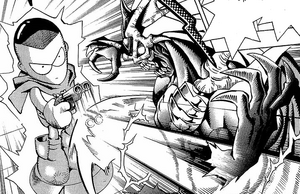 Dark Bakura starts to celebrate his victory but then sees Dark Yugi sitting in Yugi's place. Bakura is astonished, but Dark Yugi proceeds to take Yugi's roll and gets a 03. This is a high roll and Honda uses his "Thunder Grenade" attack, shooting off Zorc's left hand. Honda blows the smoke from his gun and reminds Zorc that he told him so; with his friends helping, who would be afraid.

Dark Yugi tells his friends not to worry; their lives are in his hands and starting now, so is Zorc's.

Part of episode 25: ""A New Development - Attack of the Handsome Boy"" of the Toei Yu-Gi-Oh! anime is based on this chapter. Differences included:

This event does not take place in the NAS Yu-Gi-Oh! anime. Instead Yugi and his friends find out about Dark Bakura at a later point in the story under similar circumstances in Yu-Gi-Oh! episode 13: "Evil Spirit of the Ring". Differences included: