"Board Game Deathmatch" is the thirty-fifth chapter of the Yu-Gi-Oh! manga.

Dark Yugi faces Mokuba in a game of Capsule Monster Chess in the penultimate stage of Death-T.

Dark Yugi prepares to face Mokuba in Capsule Monster Chess in Death T-4. Mokuba points Yugi to a Capsule Monster Chess dispenser, which they will take turns drawing their capsules from. Mokuba sniggers that the machine is rigged to give him powerful monsters and leave Yugi with weak ones.

Yugi suspects the machine is rigged, judging by the difference in levels.

The battlefield they are using is Garnaster's Border. As they choose the formation for their monsters, Yugi takes note of the two paths leading across the board. They can't be passed if there is an enemy waiting, he thinks and comes up with a plan to get around that.

Mokuba places his monsters in a checkered line, while Yugi groups his all together. Mokuba laughs at Yugi's weaklings all clumped together. However, Yugi knows he cannot beat Mokuba's high level monsters if they fights them all one by one, so he feels that this is the only way to face them.

The game starts and the holograms of the monsters appear in the field below Yugi and Mokuba. Jonouchi and Anzu, who is holding the sleeping Johji are held at gunpoint, by KaibaCorp's guards. Jonouchi cheers for Yugi and thinks to himself that there is no flip side to friendship, so they will stick by Yugi, no matter what. 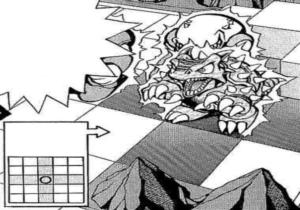 Mokuba goes first and moves "Armorsaurus". "Armorsaurus" movement pattern is highlighted below him, as Mokuba does so. He tells Yugi its his turn. Yugi sits still and Mokuba yells at him, reminding him that it's his turn. Yugi calmly says that he'll pass. Mokuba is a bit surprised. He suspects Yugi is up to something, but says he doesn't care. Since Yugi won't move, Mokuba decides to come to his monsters. He decides to split his monsters in two and attack Yugi from two sides. Mokuba proceeds to move his pieces, while Yugi keeps passing. Eventually Mokuba has Yugi's monsters surrounded.

Yugi makes his first move, getting "Beeton" to move forward 1 space. Mokuba has "Armorsaurus", who is facing Yugi's back row attack "Brain Slime", incinerating it. "Armorsaurus" then uses its ability, "Armor Attack". It curls into a ball and attacks the nearest monster in a straight line, Yugi's other back row monster, "Toppo". Mokuba laughs that's he has already destroyed two of Yugi's monsters and says that he will have some fun with "Armorsaurus" and get it to destroy all of Yugi's monsters. 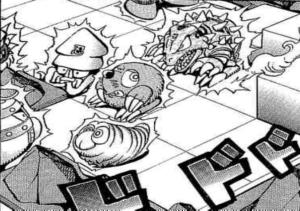 "Armorsaurus" is now behind Yugi's "Mogley". Mokuba gets "Armorsaurus" to use its "Armor Attack" again. However, Yugi uses "Mogley's" "Dig" ability. Mogley digs itself a hole to hide in, dodging the attack. "Armorsaurus" continues to roll and smashes into Mokuba's "Megaton", destroying it. Yugi comments that high level monsters have unrivaled power, but Mokuba needs to learn how to control it.

Yugi moves "Ninja Squid" up beside "Zoid "M"" to attack it. Being Level 2, it can't hope to match "Zoid "M"", but there is one way it can defeat a Level 5 enemy, Yugi thinks. He asks "Ninja Squid" to forgive him and gets it to use its "Self-Destruct" ability, taking both itself and "Zoid "M"" out.

With "Megaton" and "Zoid "M"" destroyed, Mokuba has no monsters left guarding one of the two pathways. Yugi starts to move "Beeton" through the path towards the Evolution Square at the other end. Mokuba's remaining monsters are too far back to catch up to it before it evolves. 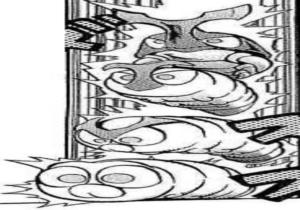 Yugi moves "Beeton" to the Evolution Square". It evolves and goes up 3 Levels, becoming the Level 5 "Hyper Beetle". Yugi comments that no matter how weak, if you believe in each step it takes, it will become strong. "Regular" Yugi is seen at is side, as he says this.

Yugi uses "Hyper Beetle" to attack and destroy "Nama Hargen" from a distance with its ability "Horn Attack". The crowd start cheering that Yugi has got Mokuba down to just one monster.

"Hyper Beetle" and Mokuba's last monster, "Big Foot" face each other. Mokuba announces that this battle will decide the game. "Hyper Beetle's" long range attacks are powerful, Mokuba thinks, but in close quarters, "Big Foot" is stronger. The two monsters collide and "Hyper Beetle" falls over. Mokuba laughs that "Hyper Beetle" is dead and Yugi is done for. Yugi gasps in surprise.

Mokuba points out that Yugi has another monster hiding on the board; "Mogley", who stayed underground after dodging "Armorsaurus'" attack. He proceeds to have "Big Foot" stomp on "Mogley". However, after "Big Foot" raises its foot, he starts to fall apart. Mokuba is mortified and realizes that "Hyper Beetle's" attack must have been a critical hit.

Yugi asks Mokuba if he knows the saying "It's not over, 'till it's over" and says that it is now over; Yugi has won.

As with the rest of Death-T, Johji was not present in the anime, but Miho Nosaka was.