Anzu and Yugi go on a date to Domino Park. In Anzu's attempts to make the other Yugi appear, she ends up used in one of the Playing Card Bomber's dangerous games.

There is a newspaper article, titled "Card Bomber Strikes Again!!"

A rough translation of the what was shown on the article in the Japanese version is as follows:

Once again the time of the bombing was announced previously by the bomber, who appears to be playing a game.

In the English version it read:

Editorial: Is The Bomber Playing a "Game"?!

Yugi reads the article frustrated that the Playing Card Bomber has struck again, making it the third time that this has happened. He explains to Anzu, who is not interested, that the bomber sends a playing card as his calling card. He asks Anzu if she heard what he said, but she seems to be distracted by something. Yugi asks Anzu what is bothering her and she claims that nothing is wrong. In the Japanese version, she snidely says that they can't spend the entire day reading the morning paper or they will be out until dark. In the English version, she snidely asks if reading the morning paper is so much fun, why does't he spend the entire day reading it. In the Japanese, Anzu is frustrated that even took her so long to get Yugi out of the house for summer vacation fun. In the English version, she is frustrated that Yugi is acting like this on summer vacation, the one time she asked him Yugi out.

The two of them finally arrive at their destination, the amusement park, Domino Park. In the Japanese, Yugi realizes that this is what Anzu wanted him to see. In the English, he can't believe that Anzu asked him out. In both version, he stutters and tried to ask if they are on a date.

At the gate the ticket attendant tells Yugi the ticket he is getting is for high school students and that he might want a grade school student ticket. Yugi gets annoyed and says that he is in high school, although he may not look it. Anzu is a bit embarrassed by Yugi's reaction.

Anzu and Yugi enter the park. Yugi excitedly looks at the different rides and asks her which one they should go on first. Anzu makes a suggestion based on it being a hot sunny day and winks. 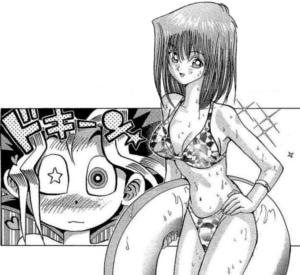 Yugi stares at Anzu in her bikini.

Anzu and Yugi come down a water slide on a giant float. Anzu stands up and holds out her hand to help Yugi up and suggests that they ride it again. Yugi heart thumps as he stares at Anzu in her bikini. Anzu takes him by the hand and brings him up the stairs asking why he's staggering. Yugi blushes and thinks to himself that even the bomber would not stand the power of Anzu's "knockout dynamite body", or simply "dynamite body" in the English version.

After the slide, the two of them start sunbathing on deck chairs. Anzu sweats in the heat and realizes how bright the sun is, causing her to feel strange. She looks at Yugi and to her surprise thinks she is seeing Dark Yugi. However he disappears when Yugi is sprayed in the face by a child with a water gun. Yugi gets up and angrily chases the child, waving his fist in the air. Anzu guesses seeing Dark Yugi was just her imagination. The ordinary Yugi, she feels is like a little kid and she starts to wonder what she can do to make Dark Yugi appear.

A tanned muscular boy tries to hit on Anzu. He asks if she is alone and if she wants to ride the slide with him. Anzu gets an idea and thinks that Dark Yugi might appear if he thinks she is in danger. She screams that the boy talking to her is a pervert and asks for help. Unfortunately for her, a bunch of other boys come over and confront the boy. Yugi arrives and asks what happened. Anzu insists that nothing happened and rushes herself and Yugi off the scene, leaving the other guy get beaten-up as he tried to explain that he did not do anything.

Anzu and Yugi go and ride on some other attractions, including a roller coaster. Yugi suggests that they ride the "Ultra Spin" next, but suddenly notices that the police are gathered around. The police chief orders an officer to have the park evacuated. He obeys and another officer reports that so far nothing suspicious has been found on the park grounds. The chief orders him to continue the investigation. The bomber's card said that the bomb was hidden in this amusement park and there isn't much time left until the time on the playing card.

After the evacuation announcement is made, Yugi thinks that this is terrible and wonders if it is the same bomber that he has read about. He insists that he and Anzu get out of there. However Anzu says that it sounds exciting and thinks that this could be her chance to see Dark Yugi. The two of them get separated when a crowd of evacuees stampede past them.

Shortly afterwards, an officer reports to the chief that there are only five minutes left until the time on the card. The chief's phone starts ringing and he answers it. On the other end, the bomber laughs and says that he will tell him the location of the bomb. He says that the lives of three people already rest on this game, before saying where it is.

As Yugi searches for Anzu he hears her calling him from Ferris wheel. Anzu thinks that this should make Yugi anxious and maybe cause Dark Yugi to come out. The police arrive and note that there are three people on the Ferris wheel in cars #1, #3 and #13. Yugi points out that his friend is on the Ferris wheel and asks if there is something wrong. To his dismay, the chief says that there is a bomb planted on the ride.

The bomber explains that the wheel takes ten minutes to turn. After the bomb will explode, but he offers them one chance to stop it and asks if they want to play a card game. If the chief is lucky the passengers will survive. The chief tells the other officers that the bomber challenged him to a card game and asks if anyone is good at card games. Yugi, who has now switched to Dark Yugi steps forward and says that he will do it.

In the wheel, Anzu excitedly notices Dark Yugi came out and is still oblivious to the danger she is in.

The bomber explains some of the rules: 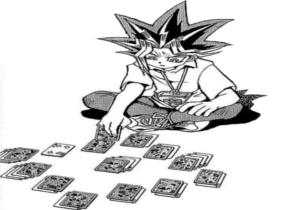 Continuing this way, Dark Yugi knows the cards will look like a clock when they all get turned over, but wonders what this has to do with the bomber's plan. Eventually, Dark Yugi turns over the last of the fours, the four of spades. He places it under the other three completing the 4:00 pile. Suddenly car #4 explodes.

Dark Yugi now realizes that Anzu is in danger as she is in car #3 and 3 of the 4 cards for that point have been matched up. Dark Yugi vows that he must save Anzu no matter what. The bomber taunts Dark Yugi by asking him if he really thinks that he will be able to end this without hurting anyone. Dark Yugi suspects that the bomber is watching and triggering the bombs, but cannot figure out where he is.

Dark Yugi plays on and collects all four eights, causing car #8 to explode. One of the police thinks that the game is over as one of the occupied cars is bound to explode sooner or later. The chief wonders how the game can be won.

Dark Yugi thinks to himself. He knows the rules of clock solitaire and how it ends. Since you start drawing from the center, once you turn over the fourth king, there won't be anything left in that pile to turn over. So by drawing the four kings the game will end. He thinks this is what he must do and with two kings already, he only needs two more, but if he draws the last three, Anzu will die.

Dark Yugi continues to play and turns over the two of hearts, completing the twos and causing car #2 to explode. Eventually, he turns over the king of clubs, leaving just one more.

With twenty seconds until all bombs go off, the police panic. With five seconds left, Dark Yugi turns over the ace of spades and plays on. With only time to draw one more card, Dark Yugi gets the final king, completing the 13:00 position and ending the game.

With the game over, the police escort the passengers to safety. Dark Yugi tells the chief that he should find the bomber in car #13, disguised as a hostage. His reasoning is that since it was the only safe car and the only place where someone could secretly see the cards.

Anzu grabs Dark Yugi's arm and suggests that they get back with their date. Although Dark Yugi does not seem as enthusiastic.

This chapter is redone in episode 14 of the Toei Yu-Gi-Oh! anime.