"The Invisible Cards" is the eighty-first chapter of the Yu-Gi-Oh! manga. In its first English printing, it was numbered as the twenty-second chapter of Yu-Gi-Oh! Duelist. In the 3-in-1 edition, its number was changed to match the original Japanese printing.

Dark Yugi faces the Player Killer of Darkness, who hides his monsters within the darkness.

The Player Killer of Darkness says that he has taken the Star Chips from eight Duelists so far tonight, but Pegasus' most important command is to take out Yugi. He is shocked that there is such a reward on the head of a little child, but is certain he is going to claim it. Dark Yugi knows the reason is that Pegasus will gain control of KaibaCorp if Yugi is defeated. The Player Killer says that if he beats Yugi now, the tournament may as well end and explains that Pegasus can afford to pay the prize money, but if his plan works he will not have to. Mai is shocked to hear that they are just Pegasus' guinea pigs. The Player Killer continues and explains that if Yugi is defeated, Pegasus' plan is then to have the Player Killers eliminate the remaining participants and win the tournament. After that Industrial Illusions will have no more competition and no more masters like Yugi will arise.

The Player Killer laughs that night falls quickly on the island, but there is no sleep for Duelists; while they lie in their beds with their guards down, his darkness creeps in and destroys them, like Mai. Mai thinks that having lost, she is now disqualified and will have to leave the island, ending her dream of Dueling Yugi. However Dark Yugi tells Mai not to worry as he will win her Star Chips back. Mai is surprised and wonders why Yugi would do that for her.

Dark Yugi tells the Player Killer that attacking under the cover of the night is the act of a coward. He does not consider the Player Killer to be a Duelist, but sees him as a thief. He vows to teach him that a thief cannot take the life of a real Duelist. 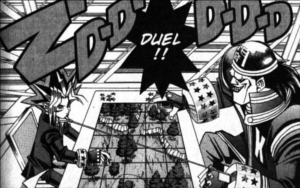 Dark Yugi, with the wire around his neck.

Dark Yugi says that he will bet all six of his Star Chips and the Player Killer will bet the eight he took from Mai. To make up for the difference, he says that he will bet his life. The Player Killer likes the offer but is skeptical, so in lieu of a guarantee, he shoots a wire out of his Duel Disk, which wraps around Dark Yugi's neck. He laughs that some Duelists try to run out of fear, but that wire is used to make sure they cannot get away. He says that if he wins, he will choke Dark Yugi to death and maybe twice to get his two Star Chips worth. This worries Anzu and Mai asks how low the Player Killers can be. Dark Yugi is fine with the conditions, but adds that the Player Killer will have to face a Penalty Game if he loses.

Anzu begs for Dark Yugi to win. Mai is no longer concerned about herself and thinks that Dark Yugi has to win. The Player Killer comments on Dark Yugi having a crowd to cheer for him and says that he has a friend too; the darkness itself. 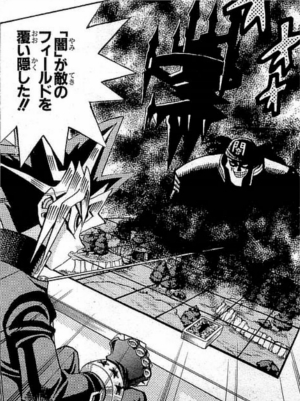 "Castle of Dark Illusions" engulfs the field in darkness.

The Player Killer laughs that Dark Yugi's monsters do not get their Field Power Source at night, but his dark cards get infinite strength. He urges Dark Yugi to play any card and says that the darkness will bury him.

Dark Yugi thinks to himself that the obvious way to get rid of the darkness is to remove the "Castle of Dark Illusions". However he does not have anything to break through its 2500 DEF. He thinks that there has to be a way to defeat it and plays "Winged Dragon, Guardian of the Fortress" in Defense Mode. 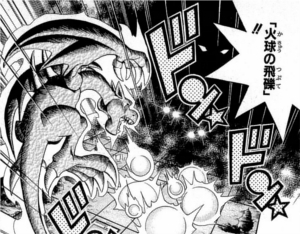 "Winged Dragon, Guardian of the Fortress" uses fireballs to light up the field.

Rather than attacking, the Player Killer Summons another monster, which hides in the darkness. All that Dark Yugi can see are its gleaming eyes. Dark Yugi thinks that there might be a way to shine light on the situation. He is unsure if it will work, but thinks he must try. He switches "Winged Dragon, Guardian of the Fortress" to Attack Mode and has it attack into the darkness with "Fireball Barrage". This briefly lights up the field giving him a glimpse of the Player Killer's monsters, "Barox" and "Dark Chimera". Dark Yugi can light up the field for an instance, but cannot attack at the same time, the Player Killer explains. Dark Yugi sees that he is right; he cannot aim at what he cannot see.

The Player Killer gets one of his monsters to attack and destroy "Winged Dragon, Guardian of the Fortress" with a "Dark Absolute" attack, dropping Dark Yugi's Life Points to 1600. He says that Yugi is as good as dead, the darkness is his home and while he is in it, he is invincible. Dark Yugi laughs that the Player Killer may be happy to be in the darkness now, but doubts he would like to be in it forever. Even though the darkness covers the Player Killer's evil face, Dark Yugi says that he will have to see it again, when he shuts down his game. He smiles that he has found a way to beat the darkness.

Holding "Swords of Revealing Light", Dark Yugi says that that card is the key and the Player Killer's life ends in five turns. He warns him to get ready as he will show him the true darkness he will wish he never knew.

Some of the fourteenth episode of the anime, "The Light at the End of the Tunnel" is based on this chapter. A number of changes were made, including: