In the 3-in-1 edition, its number was changed to match the original Japanese printing.

Seto and a group of soldiers surround the injured unconscious Kisara. Seto thinks about the girl's White Dragon ka; it would be powerful enough for him to protect the kingdom, if he could extract it.

Seto orders that she be taken to the palace and given food and water. One of the soldiers asks if they should put her in the prison. Seto rejects this and says to give her a room in the palace, so that she can get plenty of rest. As a final word he says not to tell the pharaoh, since they no longer have the luxury to be as merciful as they once did. Seto, Shada (manga) and a number of the soldiers leave for the palace with Kisara, while the remaining soldiers stay behind to guard the city.

Katsuya Jonouchi, Yugi Mutou, Hiroto Honda and Anzu Mazaki, who are watching nearby, notice the men say "Pharaoh" and assume they mean the other Yugi. The group decide to follow the men in the hopes of finding the other Yugi.

The priests and soldiers enter a large palace, but the gates shut behind them before the others can follow. Jonouchi starts to wave at one of the guards and tell him that they are friends of the Pharaoh. Once reminded that no one in this world can see them, Jonouchi remembers they can phase through walls like ghosts. He dashes towards the door, but smacks straight into it. Bobasa explains that the strength of the pharaoh's will to keep out intruders is what is preventing them from entering. Jonouchi wave his fist in the air calling the Pharaoh a jerk for treating them this way. Yugi insists that it is not like that and they will get to see the pharaoh another time, but worries that a cruel fate awaits his other self.

Inside the palace Seto and Shada return and report to the pharaoh that they have been unable to confirm Bakura, King of Thieves' death, but they have strengthened their guard. The Pharaoh still has a bad feeling about this. He thinks to himself that he heard a voice from his Millennium Pendent, trying to tell him something. 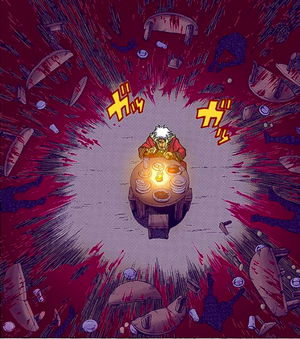 Outside Dark Bakura, invisible to the people of this world, hovers over the city and hears people converse over whether Thief Bakura had died or not. Dark Bakura smirks to himself; if Bakura was dead he would not be there. Dark Bakura remembers where and when Thief Bakura's will appear next and what he will do. He then flies across the city to witness it.

Thief Bakura enters an inn exhausted. He slams a gold bracelet on the counter as pay and demands lots of food. The inn keeper has Bakura served and observes how the gold is worth more than the inn itself.

Bakura catches the eye of a couple of men at the inn. They approach him with knives for more gold such as the Millennium Ring around his neck. Dark Bakura prepares himself to enjoy the events about to unfold. They recognize Bakura as the thief and proceed to kill him. Bakura whispers something and all men surrounding him are abruptly sliced-up. Dark Bakura laughs at the display as Thief Bakura finishes his food.

With the evil power of the Millennium Ring, Thief Bakura plans to get revenge on the Pharaoh. Dark Bakura smiles, from the other end of the table, while holding his own Millennium Ring. He remembers the thief's future and announces the beginning of “round two of the palace tragedy”.