The chapter concludes the "Millennium Enemy" storyline. In the English version it is the final chapter of the Yu-Gi-Oh! subseries, as later chapters are released under the titles Yu-Gi-Oh! Duelist and Yu-Gi-Oh! Millennium World.

Dark Yugi and his friends finish their game of Monster World with Dark Bakura. The result of the game rests in a final dice roll between both sides.

Zorc is in his Last Zorc form. Although they've managed to cut him in half, the adventurers are cautious that he is still powerful. As they prepare for the final dice roll, Dark Bakura plans to make Last Zorc self-destruct, killing the adventurers with him.

Dark Bakura explains that whoever rolls closest to 00 goes first and subsequently defeat their opponent. However if it is a tie, they will attack at the same time and since he plans on making Zorc self-destruct, it will result in both parties dying and Dark Bakura emerging victorious. 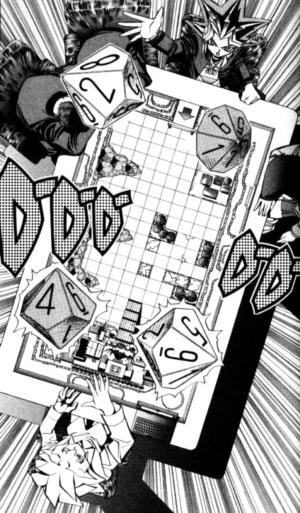 The adventurers channel their faith into Dark Yugi's hand before he rolls the dice. Dark Bakura thinks that their efforts shall be a useless struggle as they shall die in this world with Zorc. Even if his avatar, Zorc, dies too he thinks he shall survive because his soul will live forever as long as the Millennium Ring exists. Using the power of the Millennium Ring, Dark Bakura seals a part of his soul into his dice, which he calls doppelganger dice. With the doppelganger dice, he should be guaranteed to get a Super Critical.

Dark Bakura's dice land on 00. He laughs at how his opponents came close to victory, only to fall into the jaws of defeat. He admits that it was the best game ever with a dramatic ending where everyone dies. As he begins to announce Zorc's last move, he notices his dice starting to crack. 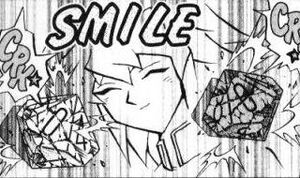 Dark Bakura sees the soul of Bakura over the breaking dice. Bakura says that he does not want to lose any more friends, even if it means his soul should shatter. Dark Bakura realizes that when he sealed a part of his soul in the dice, Bakura must have also sealed his own soul in them too. But by putting his entire soul in the dice, he would not be able to return to his body, Dark Bakura thinks and calls this suicide. Bakura thanks everyone for believing in him and the dice explode. Dark Yugi is shocked at first, but thinks he can still feel Bakura's heart. 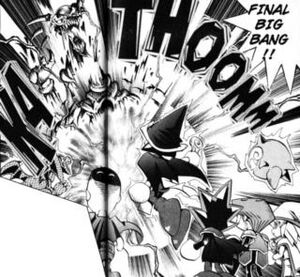 Dark Yugi continues the game and points out that he cannot see the Super Critical that Dark Bakura rolled and with no roll from Dark Bakura, his side continues to attack. He channels all his anger into Anzu's last attack and she uses her "Final Big Bang" attack to destroy Last Zorc.

With Zorc defeated, Dark Bakura falls unconscious onto the table and the rope attached to the Millennium Ring breaks, causing it to fall from around his neck to the floor. Dark Yugi checks on the body and reports that Bakura is dead; having sacrificed his soul for them. However Bakura's avatar speaks and tells them that Bakura is still alive in him.

Bakura's avatar explains that his master, Bakura, created him into this world and through his adventures made him grow into a Level 13 white wizard. Now he claims he can repay his master back. Since he is Level 13, his healing magic should be strong enough to transfer his soul back into his master. Not being able to move without the will of a Game Master or player, he asks Dark Yugi to roll the dice for him. Dark Yugi agrees to and is sure he will roll a Critical. Bakura explains that the next time they meet in this world, he will be a Level 1 white wizard with no experience. Dark Yugi rolls a 00 and Bakura uses the healing magic "Luonazun" to transfer his soul back his master's body. 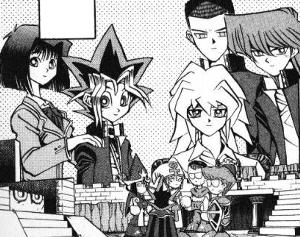 The players look at their characters after the game.

Yugi, Anzu, Jonouchi and Honda's souls all return to their bodies. They and Bakura glance down at the miniatures that had been their bodies and thought that they looked happy.

A few days later, Mr. Karita and Bakura's friends who were comatose in hospital regained consciousness. At school, Karita yells at Yugi, Jonouchi, Anzu and Honda as they arrive late and threatens detention. They wonder who he thinks got him back into his body and remark that he was not even very good as "Villager D". 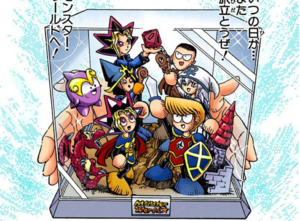 In class, Bakura greets the others, who are happy to see that he got the bandage taken off his left hand. He says that he has something to show them and holds up a diorama he made of their adventure that he made as a symbol of their friendship when they fought together. The diorama contains models of his, Yugi, Anzu, Jonouchi and Honda's characters, Pokii, Pao and one of Dark Yugi holding a die. He invites his friends to go with him again someday to Monster World.