"Arena #1", known as "First Battlefield" in the Japanese version, is the twenty-eighth chapter of the Yu-Gi-Oh! manga.

Sugoroku is attacked by the holographic monsters inside the Battle Box. Yugi panicky stands next to the box, shouting "Grandpa". Yugi's grandfather is now experiencing death in the virtual reality of the simulator box, Kaiba laughs and in five minutes, he will go insane, a testament to those who defy him. Yugi demands that his grandfather be let out. Kaiba agrees to under one condition, Yugi face the hidden side of Kaiba Land, Death-T; the theme park of death, which Kaiba has spent ¥10 billion (about $85 million US at the time) to prepare. Yugi accepts and Kaiba has one his guards stop the simulator.

Steam is released from the box and the holograms disappear. Yugi rushes inside to his panting grandfather. Sugoroku apologizes for losing and calls Kaiba a terrible young man, who will do anything to win a game, even take someone else's life. Sugoroku hands Yugi his Deck. Although he lost to Kaiba with it, to him the cards are his soul and he is certain Yugi can beat Kaiba using them. Yugi clasps Deck and vows to win with the cards of his grandfather's soul.

Jonouchi comes over and informs Yugi that he is after calling an ambulance. The paramedics take Sugoroku away on stretcher. Yugi is sorry that he cannot go with him.

Kaiba laughs at Yugi for taking his "loser Grandfather's cards". Kaiba has three of one of the monster powerful cards on the planet, "Blue-Eyes White Dragon" and now Yugi has none, Kaiba reminds him. Yugi thinks Kaiba is a coward for tearing-up Sugoroku's "Blue-Eyes White Dragon", the card of his heart. A rematch is what he has been planning, Kaiba informs Yugi and thinks to himself that this time the odds of his own success is over 99%. The stage for their Duel will be the dome at the top of the building. They are currently on the second floor. Yugi will have to pass a series of deadly games, each bringing him closer to the top, but Yugi shall never conquer Death-T, Kaiba laughs.

Jonouchi comes over and tells Kaiba to count him in too; he refuses to let Yugi go through this alone. Kaiba smirks and thinks Jonouchi will regret his foolish friendship when he experiences Death-T. While Jonouchi could punch Kaiba in the face right now, he says that it would be meaningless, however Yugi will beat Kaiba in the card game and he is willing to stake his life to help him get there.

Honda arrives on the scene, insisting that he be included too. On his back, is his nephew Johji, who his sister is making him babysit. Johji had kept whining to go to Kaiba Land, which is why they were in the audience. He is not going to let Yugi go through this without him. Yugi is about to thank Honda, when Johji suddenly blurts out "Yaay! Kaiba's gonna win". Honda goes furious and thumps Johji on the head, calling him a brat and telling him to shut up. Jonouchi tries to tell Honda not to make Johji cry. Johji whines that it hurt and threatens to tell his mother. Yugi is thankful that Honda and Jonouchi are doing this for him. 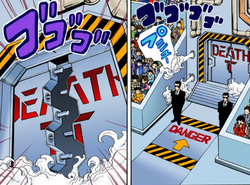 Yugi, Jonouchi and Honda stand ready for Death-T. Kaiba smirks that he will bury them all in the same grave and orders that the gate of Death-T be opened. Steam comes out the walls around large thick doors, labeled "Death T" as it opens. A danger sign is on the floor pointing into the chamber. Yugi's heart pounds as he wonders what horrible things are waiting for him beyond the doors. Kaiba tells him to step through; they are all waiting for the him. The audience believe that this is a whole other theme park that only special guests are allowed to use and consider Yugi and his friends lucky to be using it. The three friends and Johji step inside. As the doors lose behind them, Kaiba laughs that he will be waiting for Yugi at the top. 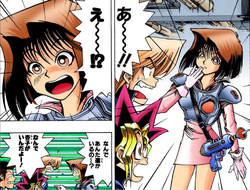 The guide turns out to be Anzu.

The group walk through a long tunnel, wondering when the game is about to start. They finally come to a set of doors labeled "Death T-1". The doors open and they step inside. Alarms start to go off shouting "emergency!" and a girl approaches them asking for help.

Yugi, Jonouchi and Honda's jaws all drop, as they recognize her as Anzu. Anzu is just as surprised, and asks what they are doing here. Jonouchi retorts that that is his question. Anzu explains that she started working at the amusement park today. She lost her job at Burger World after punching a customer who had touched her rump. So she applied for a job at Kaiba Land and was given this costume to play the guide for this game.

Jonouchi asks why she screamed for help. Anzu replies that it is part of the act, and after that, she is supposed to say that the enemy is about to blow up this space station, and they are the only ones who can save it. She instructs them to put on their cyber vests and defeat the intruders with their laser guns.

the guys suit-up for the game.

Stunned Jonouchi asks how she can act like that at a time like this. Thinking that he was critical of her act skills, Anzu replies that she has been practicing hard and does not think her acting is that bad. Jonouchi realizes that she does not know what this park is about, but thinks that she is better off not knowing.

They get ready for the game, which Honda deduces is some sort of shoot out. Honda, Yugi and Jonouchi get kitted-up, albeit feeling stupid wearing the vests. Anzu informs them that this is a three on three shooting game and the battle shall take place in the electrical field behind the next door. Each vest has a sensor. If a player's sensor gets hit, they will feel a vibration and will be out of the game. First team to lose all their members loses the game. Yugi does not think the game can be that simple and is suspicious that Kaiba is planning some sort of trap. 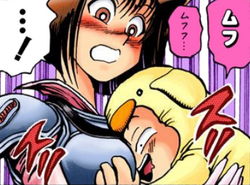 Before leaving, Honda hands Johji to Anzu, asking her to take care of him for the him. Anzu looks at him uneasily and asks if it is Honda's kid. Honda asks if she is crazy and leaves her with the baby. Anzu smiles as Johji starts acting cute. However, he suddenly plunges his face into her breasts. Anzu calls the baby a perv and wishes the others luck as they walk through the door. 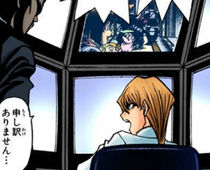 Elsewhere Kaiba is watching the group on a monitor. He asks who hired Anzu, as she is one of Yugi's friends. The guard Saruwatari, who is accompanying Kaiba, apologizes for this. The group enter the battlefield and Kaiba asks if his own team is ready. Saruwatari complies and informs Kaiba that they have prepared a special team to face the three of them, each one a professional in their own field. Kaiba looks up at the three monitors displaying the members of his team:

Kaiba smirks that it is over already; the guns he has given Yugi are just toys, but the other team has real lasers that will shock Yugi and his friends with 1 million volts, should their sensors get hit. Kaiba laughs that he will be watching Yugi play this death game and nothing will give him more pleasure.

Gayle smirks that it was nice of Kaiba to put a bounty on each of their oppositions heads. "¥10,000 each", McGuire continues, "piece of cake". Name unknown smiles craftily, saying that he will be finishing all three by himself.

The two teams enter a battlefield, filled with various walls and the game starts.

Episode 22 of the Toei anime, "Tearing - Boarderline Shooting" is partly based on this chapter.

A number of changes were made, including: