"The Line of Fire", titled "Are You Going to Attack?!" (撃てるのか！？ Uteru no ka!?) in the Japanese version, is the 208th chapter of the Yu-Gi-Oh! manga. In its first English printing, it was numbered as the 149th chapter of Yu-Gi-Oh! Duelist. In the 3-in-1 edition, its number was changed to match the original Japanese printing.

With all the odds against him, Dark Yugi has Summoned "Slifer the Sky Dragon," his God card. Dark Bakura appears to have lost, but Marik Ishtar has a last dirty trick up his sleeve.

Holding the card high in the air, Dark Yugi tells "Slifer the Sky Dragon" to come forth as lightning splits the sky. The serpentine dragon descends above the blimp, and Dark Bakura looks at the colossal red dragon in shock as it coils behind Dark Yugi, who declares that God is with him. Dark Bakura is horrified that Yugi Summoned the legendary dragon just as he was about to complete the Ouija Board's lethal combo. It's the first time most of Yugi's friends have seen the Egyptian God, and Anzu can only ask if this is "Slifer." "Yugi's God card," Jonouchi says. Kaiba smirks, satisified that Yugi drew the God card on his last turn, thinking that Yugi is his only rival for the title of ultimate Duelist. In her room, Ishizu looks out the window at "Slifer's" coils, thinking that the Gods themselves do Yugi's bidding. She thinks that the one who gathers three God cards at the end of Battle City will earn the title of King. Closing her eyes, she thinks that when this trial has been overcome, the King's lost memories will be restored.

With "Slifer" behind him, Dark Yugi thinks that his memories are locked in darkness. He must win to cast light upon them. He tells Bakura to brace himself. Dark Bakura is still shocked at what's happened, and Marik appears in his mind again. Having God Summoned on him, he comments. Things aren't looking so good, are they "Bakura." He explains that "Slifer's" ATK is determined by the number of cards in the player's hand. Yugi has four cards, therefore "Slifer" has 4000 attack points. Bakura only has 3500 Life Points, and no monsters to shield him. When "Slifer" attacks, he'll die. Dark Bakura refuses, claiming that he'll never die. The three monsters that Yugi sacrificed to Summon "Slifer" were brought back from a turn ago by his Spell Card, "Deja Vu." The marionette's spirit was possessing one of those monsters. In other words, the moment they were sacrificed, the spirit was released from within the monster. According to the rules of "Deja Vu," it's returned to haunt Yugi's field. Sarcastically wondering which monster he should possess, Dark Bakura orders the spirit of the marionette to possess God.

But the spirit is simply dispelled when it tries to possess "Slifer," much to Dark Bakura's shock. Marik calls him a fool - a low-level monster like that doesn't have the power to possess God. Dark Bakura realizes that it's really over; there's nothing he can do. Dark Yugi tells Bakura that he wins. Jonouchi cheers, telling Yugi to finish him, and turn him back to normal with a shot from God. Dark Yugi calls "Here I go Bakura!" and begins to attack with "Slifer." As Dark Bakura seethes, Marik thanks him. HIs defeat will serve his purposes, their purposes. Dark Bakura is surprised.

Rishid has entered the arena. Jonouchi comments that it's him, and Kaiba thinks "Marik." The real Marik smiles, as Rishid looks up at Dark Yugi, who instantly and furiously calls Rishid scum. "Marik" explains that that boy is being controlled by his Millennium Rod. Dark Yugi is shocked that Marik is the one who brainwashed Bakura, and "Marik" replies that he'll show him proof, by releasing Bakura's real personality.

Bakura suddenly cries out in pain, sinking to his knees as blood begins to run from his stab wound. Dark Yugi yells out his name, while Jonouchi and Anzu cry out his first name. Bakura asks Yugi where he is, and why. "Marik" explains that as they can see, Bakura is badly wounded. An attack from the "Sky Dragon" will grant him victory, but the shock could very well take the boy's life. He asks a furious Dark Yugi if he's willing to do that, and Dark Yugi furiously insults him inside his head for using Bakura's life as a shield. "Marik" turns to leave as Jonouchi yells that that's not fair. Honda yells at Bakura to wake up. The real Marik chuckles, telling Rishid that it was good acting. Rishid simply replies that the pain in his heart is not that from the cold wind which whips past him.

A horrified Dark Yugi can only yell "Bakura! No!" knowing what happens if he attacks. Marik smirks, thinking that if Yugi hesitates to attack, all five letters will appear on the Ouija Board. It's Yugi or Bakura. Isono tells him to continue the battle, reminding him that players have only five minutes to think on each turn, and Yugi has 30 seconds left. Bakura is still blind to all but the pain in his arm, and Dark Yugi knows his friend doesn't have the mental strength to withstand God's attack. Isono tells Yugi that he has 20 seconds left, and Kaiba asks Yugi what's the matter, why is he stalling? He tells Yugi to finish him off. Anzu cries that this is awful, and urges somebody to stop the Duel. Honda adds that Bakura needs to be treated or he'll die. Yugi has ten seconds left. 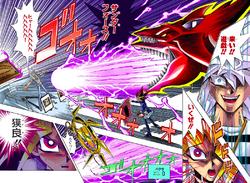 Marik and Dark Bakura stand over Bakura in spirit. Dark Bakura observes that this is Marik's game. He's tied Yugi's hands. As per their agreement, Marik replies. Seeing Bakura in pain, Dark Bakura furiously snarls that even he has ways he likes to win and ways he hates to win. The Millennium Ring glows, and he orders Marik to stay out of this, taking control of Bakura. Dark Bakura tells Yugi that he'll let him win this time, urging him to attack him. He reassures Yugi that his little gaming buddy won't die. Dark Yugi is shocked, while Dark Bakura snickers to himself, thinking that he needs this host in the end to gain the power of darkness. He tells Yugi again to do it, and Dark Yugi replies that he asked for it, ordering "Slifer's" "Thunder Force." Dark Bakura stands before the Ouija Board, arms spread wide and laughing as "Slifer the Sky Dragon" breathes a pillar of lightning at him, connecting and reducing his Life Points to zero, snapping the cord of the Millennium Ring and throwing it away. Dark Yugi can only gasp, thinking his friend's name.

Turn 16: Dark Yugi
Dark Yugi's has just Summoned "Slifer the Sky Dragon." (X000/X000) Since he has four cards in his hand, "Slifer" has 4000 ATK and DEF. Dark Bakura orders the spirit of "Dark Necrofear's" marionette to possess "Slifer," but as a God card, "Slifer" is unaffected by the effect. Dark Yugi orders "Slifer" to attack directly, but is halted briefly when Rishid, posing as Marik, releases Bakura (actually negotiated by Marik and Dark Bakura.) Dark Yugi almost runs out of time to finish his turn, but Dark Bakura, disliking the strategy, retakes control of Bakura. Dark Yugi attacks directly with "Slifer the Sky Dragon." (Bakura: 0)