"The Wild Gang (Part 2)" is the twelfth chapter of the Yu-Gi-Oh! manga.

Jonouchi turns on Hirutani's gang for punching Yugi earlier, but is unable to take them all on at once. Meanwhile, Yugi, Anzu and Honda desperately search for Jonouchi.

Yugi, Honda and Anzu rush to J'z to find Jonouchi. Relieved that he hasn't changed, they hope they can find him to bring him back before anything bad happens. 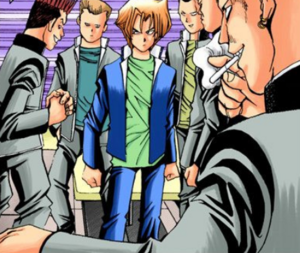 Over in J'z, Jonouchi has just knocked out one of the gangsters for hitting Yugi earlier. Hirutani has ordered the rest of the gang to seize Jonouchi, so they can teach him a lesson. Jonouchi says that he's okay with that, but worries after counting that he's up against five other people. A black haired gangster makes a swing at Jonouchi, but Jonouchi moves back avoiding the punch and knees him in the stomach. Jonouchi then punches the spiky haired gangster, knocking him back, but the large gangster comes up behind Jonouchi and hits him in the back, knocking him down. The large gangster, the spiky haired one and a blonde one all hold Jonouchi down at once and Hirutani orders them to take him to the "torture chamber".

Yugi, Honda and Anzu eventually arrive outside J'z. Honda orders the other two to wait outside. Yugi objects, but Honda reminds him that the gang is from Rintama, Yugi can't take them on and although Yugi is his friend, he doesn't want him falling to his level.

Honda dashes down the stairs and kicks open the door, demanding Jonouchi be given back. However he notices the place is deserted. He looks around and spots the gangster who hit Yugi, lying unconscious. He shakes the boy a bit, but is unable to wake him up.

Honda returns to Yugi and Anzu and reports his findings. Judging by the mess the place was in, he suspects Jonouchi is in trouble. Without any lead on where he is now, the three decide to split-up to look for him. Before they separate, Honda tells the others not to try anything on their own and come back to him if they find something.

Inside the torture chamber, which is an abandoned warehouse, Jonouchi has his hands tied above his head to a hook, which dangles from the ceiling. Hirutani laughs that he likes this view and Jonouchi smirks that his view isn't bad either; he can see a "red-butt boss monkey and his pack". Hirutani allows his minions to beat Jonouchi for a few seconds.

Hirutani talks about how Jonouchi had always acted like they were equal back as far as middle school and although back then some high schools gangs even feared them and they had plenty of people working for them, the one thing he never thought Jonouchi was that he was the boss and Jonouchi would always be his second in command. Jonouchi laughs that that is exactly what a boss monkey would think. Jonouchi claims to have a good memory and remembers how many times each of the gangsters have hit him. He holds a grudge and intends to pay them back double.

Hirutani informs Jonouchi that this isn't even the main course and the next item on the menu will blow his mind. The gangsters pull out 20,000 volt stun guns. The spiky haired minion threatens to use them to blow the aforementioned memories out of Jonouchi's head and maybe even take his life. Jonouchi swings from the rope and kicks him in the face, knocking him out. The black haired minion hits Jonouchi with his stun gun, causing him to scream out loud.

Elsewhere Yugi is still searching for Jonouchi. He stops for a moment and clasps his Millennium Puzzle begging it to tell him where Jonouchi is. He changes to Dark Yugi who sees a vision of the warehouse.

Back in the warehouse, Jonouchi can barely move. Seeing that he's just twitching and can't talk, the other gangsters ask if they should stop. Hirutani orders the black haired minion to continue. he is reluctant and points out that if he continues Jonouchi will die. Unconcerned, Hirutani yells at him to do it. However they are interrupted by the appearance of Yugi, who shouts at them to stop.

Hirutani recognizes Yugi from earlier and the others laugh that Jonouchi is done for is all the help he can get. 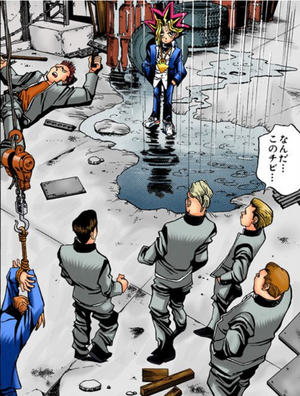 The large gangster punches Yugi telling him that this is their hangout, not his playground. Yugi is knocked back next to the spiky haired guy, Jonouchi knocked out. He sets up something involving a metal bar, while the other close in on him. He hangs his Millennium Puzzle from a chain and stands up on a tire, before challenging the four conscious gangsters to a game.

Yugi explains the game, saying that there's a time bomb hidden at the gangsters feet. If they can find its switch, they'll get his life. If not, they'll be subjected to a Penalty Game; the bomb will explode taking them with it. 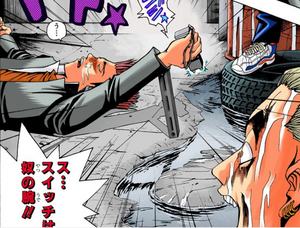 The gangster is the switch.

The black-haired minion says that he's lying and suggests they stun him. Hirutani suddenly notices something and shouts not to use the stun guns. He sees what Yugi was getting at. They're soaked with rain and Yugi let himself get hit to lure them into a puddle of water. If one of them was to turn on a stun gun, the 20,000 volts would go from his hand to the puddle, hitting all of them. This is the bomb, he was talking about. Thinking they've found the switch the gang proceed to deliver Yugi's Penalty Game, which is that he dies.

Yugi smiles that they didn't find the switch, which is about to activate right now. Hirutani notices the spiky haired boy's arm is being held-up by a metal bar and is still holding a switched on stun gun. Above him is Yugi's Millennium Puzzle, which is causing drops of water to drip on his face. The water wakes him up, causing him to knock over the bar and drop his arm into the puddle electrocuting the gang.

Anzu and Honda arrive at the warehouse and find Yugi helping Jonouchi up. They ask if Jonouchi is alright and Anzu notices that Yugi is hurt too. Jonouchi wakes up and sees Yugi, who suggests that they go back.

Episode 9 of the Toei Yu-Gi-Oh! series, "Explosion - Ultimate Yo-Yo Technique", combines the events of this and the previous chapter with Duels 48 and 49.