"The Cards Bare Their Teeth" is the seventy-fifth chapter of the Yu-Gi-Oh! manga. In its first English printing, it was numbered as the sixteenth chapter of Yu-Gi-Oh! Duelist. In the 3-in-1 edition, its number was changed to match the original Japanese printing.

Dark Yugi battles the "Blue-Eyes White Dragon" Summoned by the Ventriloquist of the Dead. 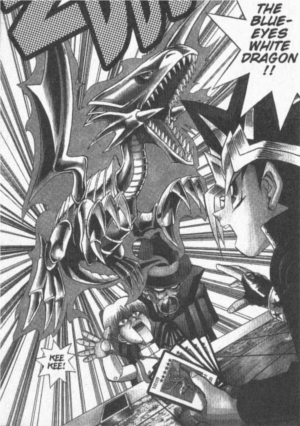 Much to Dark Yugi's surprise the ventriloquist has just Summoned "Blue-Eyes White Dragon", a card which is only owned by the real Seto Kaiba. Mokuba warns Dark Yugi to be careful; Industrial Illusions sent a spy to steal Kaiba's Deck.

Saruwatari thinks to himself that this is just the beginning; even if Dark Yugi defeats the ventriloquist, there are plenty of other Player Killers mixed in with the Duelists brought to the island.

The ventriloquist silently laughs and thinks that Dark Yugi cannot win, as his guilt and Kaiba's cards will smother him. He gets the Kaiba puppet to claim that he is really Kaiba borrowing the body of a doll, so that he can get his revenge on Dark Yugi. Dark Yugi starts to wonder if part of Kaiba's soul, which contains his undying grudge and thirst for vengeance, really is part of the doll. He wonders if Kaiba will always be his arch-rival. Jonouchi tells Dark Yugi to calm down and Honda insists that the it is just the ventriloquist throwing his voice.

As the Duel continues, the ventriloquist has the puppet forfeit his attack to play a card face-down instead and laugh that soon Dark Yugi's monsters will have nowhere to run. Dark Yugi begins his turn and wonders if the face-down is a Spell or Trap Card. Since his "Dark Magician" isn't powerful enough to compete with the "Blue-Eyes White Dragon" in battle, he switches it to Defense Mode. He also Summons "Curse of Dragon" in Defense Mode. The puppet laughs that he knew Dark Yugi would do that and says that it won't save him, as he activates his face-down Trap Card, "Stop Defense". This switches Dark Yugi's monsters to Attack Mode, meaning that he can take damage to his Life Points if they're destroyed in battle. On the ventriloquist's turn, "Blue-Eyes White Dragon" uses its "Burst Stream" attack to destroy "Curse of Dragon", dropping Dark Yugi's Life Points to 1000.

Dark Yugi starts to panic and wonders how he can win now. Saruwatari laughs and comments that he bets Kaiba is happy if he's watching from Heaven. Mokuba's eyes began to tear and he angrily says that his brother isn't dead. Dark Yugi had told him before that Kaiba would come back and he had believed him, Mokuba says and asks Dark Yugi where he is, as he has been waiting a long time. Dark Yugi thinks that Mokuba is right and he too has faith in Kaiba. He thinks to himself that he won't lose and begins his next turn. 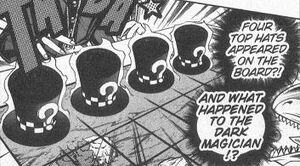 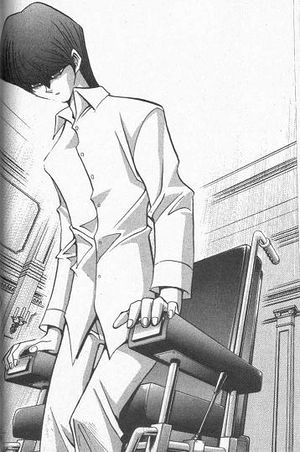 Kaiba wakes from his coma.

Much to Dark Yugi's surprise the "Blue-Eyes White Dragon" reappears and destroys "Dark Magician", dropping him to 500 Life Points. The ventriloquist has the puppet ask what the matter is and remind Dark Yugi that Kaiba has three "Blue-Eyes White Dragon" cards and he just after playing the second one. Thinking that there are no cards in his Deck that can defeat a "Blue-Eyes White Dragon", Dark Yugi thinks he has lost. He Summons "Feral Imp" and ends his turn. The ventriloquist laughs that this is the end and declares an attack on "Feral Imp". However the dragon refuses to attack. Standing up and disregarding the puppet, he demands to know what was happening. The dragon then begins to disappear. He wonders what's going and drops the puppet. Dark Yugi suspects that this is to do with the real Kaiba.

Meanwhile in Kaiba Manor, Kaiba awakes from his coma and steps out of his wheelchair. His maid was just about to enter the room as this happened and she dropped her tray in surprise to see him awake. Kaiba looks out the window and thinks "Yugi...".

Dark Yugi VS. the Ventriloquist of the Dead[edit]

A number of the cards were released as different types and with different effects in the Yu-Gi-Oh! Official Card Game and Yu-Gi-Oh! Trading Card Game.

In the Yu-Gi-Oh! anime, parts of the ninth episode, "Duel With a Ghoul" and the beginning of the tenth episode "Give up the Ghost" are based on this chapter. There are a number of differences including: