"Battle Beyond Hope" is the thirty-sixth chapter of the Yu-Gi-Oh! manga.

Seto Kaiba tries to inflict the "Experience of Death" Penalty Game on Mokuba for losing to Dark Yugi. Afterwards, Seto faces Dark Yugi in a game of Duel Monsters in the final stage of Death-T.

Jonouchi and Anzu celebrate the other Yugi's victory over Mokuba in Capsule Monster Chess. The crowd shows mixed reactions; some cheering and some stunned and asking who that pointy haired kid is. Jonouchi says that he's not "that pointy haired kid", his name is Yugi and he is his friend.

Mokuba sits frustrated and in disbelief of his lost, hitting his fist off the table and repeating "No way...". Yugi gets up and says that he is leaving for the final stage, where Kaiba is waiting. Mokuba calls him back, claiming to refuse to believe that he lost. All of his monsters were of higher level and were stronger than Yugi's, he says, so there was no way he could lose. Yugi ignores him and walks out.

Once outside, Yugi sees Kaiba's face on the screens above the Battle Box. Kaiba laughs that he's been waiting for Yugi. He congratulates Yugi, saying that he had gotten bored of these amusements. He instructs Yugi to take the path to the elevator and rise to the final stage. Yugi replies that he intends to and orders Kaiba not to go anywhere. 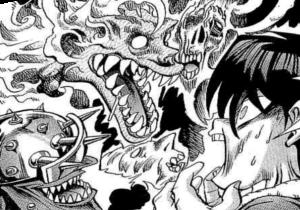 Mokuba, subjected to the "Experience of Death" Penalty Game.

Kaiba looks down at Mokuba, who tries to explain. Kaiba says that he has felt Mokuba's loser gaze staring at his back for years. He had kept telling Mokuba over and over that if he plays with fire he will get burned. Mokuba tried to plea with Kaiba, but Kaiba continues and reminds him that only the winner is allowed out of the box and a Penalty Game awaits the loser, as that is the law of Death-T. He pushes a button, triggering the Penalty Game.

The Battle Box starts to fill with with steam. Mokuba starts to panic and wonders if his brother would really do this to him. The room fills with monsters as the "Experience of Death" Penalty Game takes place. Mokuba yells in terror. Yugi looks back, astonished that Kaiba is putting his own brother through this. 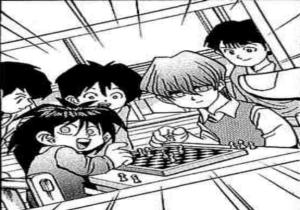 The photo of Mokuba and Seto at the orphanage.

Inside the box, Mokuba screams and calls for his brother to help him. He sees a hand, reach inside, asking for him to take it. Mokuba grabs the hand and is pulled out of the box and finds he was saved by Yugi. Mokuba gasps and pulls his hand away. He asks Yugi why he saved him. Yugi replies that he wouldn't have won, if he didn't have friends who reach out to him. Mokuba thinks about what Yugi said about friends and then recalls his Seto saying that until Mokuba realizes that there is no such thing as brotherly love, he will always be a loser. He clasps his hands onto his head in frustration.

As Yugi walks away, Mokuba pulls out a photo of him and Seto, when they were younger. He thinks to himself that his brother has changed and it all started that day. Its like Seto has been possessed by a demon of gaming, he thinks. Mokuba looks up at Yugi, who is making his way towards the elevator and thinks "Yugi... Maybe when you face my brother...".

Kaiba gets his briefcase and heads up to the final stage, Death T-5, where he plans to end his revenge. The audience evacuate the Second Arena and race to get good seats in the Dome Duel Arena for Yugi and Kaiba's Duel. Saruwatari, still holding Jonouchi at gunpoint, says that Jonouchi and Anzu are going upstairs too. Jonouchi doesn't object and asks for front row seats, so they can get a good view when Yugi "clobbers that jerk Kaiba". 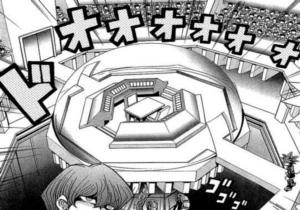 Jonouchi swipes Saruwatari's phone to make a call. He explains to Anzu that he is phoning the hospital, where Yugi's grandfather was taken and since no one could go with him, he asked Hanasaki to check on him. In the hospital, Hanasaki reports on the phone that surgery was started on him an hour ago - and the surgeon says there isn't much hope. Jonouchi asks Hanasaki to stay there and keep watch, telling Anzu that it sounds bad; he then tries to call Honda, but gets no reply.

Yugi arrives at the Dome Duel Arena. Reflecting on what Kaiba has put his friends and family through, Yugi refuses to ever forgive Kaiba, even if he begs for mercy. The doors at the other side of the arena open and Kaiba arrives.

Kaiba welcomes Yugi to the final stage an the two of them enter the dome and sit at the table. The two glare at each other and Kaiba smirks that words mean nothing to them anymore. What will decide their fates, he says, are the cards, as he places his Deck on the table. Yugi takes out his grandfather's Deck and gets ready.

Kaiba thinks to himself, congratulating Yugi on getting this far, and smirks that it's almost a shame that Yugi will die. His Deck contains 3 of the strongest cards in the world, the "Blue-Eyes White Dragons", and he believe no card that exists can beat them. 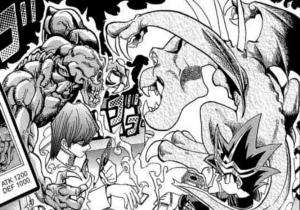 Both players shuffle each other's Decks and start the Duel. Their Life Points are set at 2000 and they draw their starting hands.

Yugi goes first and Summons "Winged Dragon, Guardian of the Fortress" in Attack Mode, with 1400 ATK. Kaiba responds by playing "Hitotsu-Me Giant", a monster with 1200 ATK. "Winged Dragon, Guardian of the Fortress" attacks and destroys "Hitotsu-Me Giant" with its "Fireball" attack. Kaiba's Life Points drop from 2000 to 1800. Kaiba smirks that it didn't hurt a bit.

This chapter uses an old set of rules for Duel Monsters.

The following cards were used in this chapter. Cards in italics debuted here.

A number of monsters also appeared in Mokuba's Penalty Game, although not cards. These included: