"Solve the Puzzle!!" is the 142nd chapter of the Yu-Gi-Oh! manga. In its first English printing, it was numbered as the 83rd chapter of Yu-Gi-Oh! Duelist. In the 3-in-1 edition, its number was changed to match the original Japanese printing.

Yugi seems to be in a hopeless situation. Considering himself the winner already, Ryuji tries to solve the undone Millennium Puzzle, but seems not to be able to. Dark Bakura declares that no one can solve the Puzzle besides Yugi, and that he will be the winner of this game. 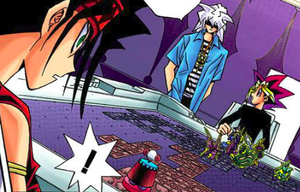 Dark Bakura, confident that Yugi will win, despite his disadvantageous position

Dark Bakura asks if Ryuji hears him; Yugi will win this game. Ryuji wonders who Bakura is, and as Yugi thinks Bakura's name, Dark Bakura explains that only one person who ever lived can wield the Millennium Puzzle and it's not Ryuji. Yugi thinks in shock that Bakura put on the Millennium Ring, and its soul has taken over his body. Dark Bakura chuckles, reassuring Yugi that he's his friend now and he's seen the error of his ways. Yugi is suspicious, so Dark Bakura reminds him of what Pegasus said at Duelist Kingdom; each of the seven Millennium Items are pieces of the puzzle of the Pharaoh's memories. They are partners sharing a greater consciousness; they can't exist without one another, so what is there to fear about that? Yugi wonders whether Dark Bakura is telling the truth, but decides that the most important thing at the moment is winning this game, and his other self would feel the same way.

Yugi only has one creature left, and two Life Points, and he doesn't have anything that can stop Ryuji's super-powerful creature. Bakura said he could turn the tables, but how? He doesn't know what to do. Dark Bakura thinks that Yugi solved the Millennium Puzzle; he should be able to find the one way out. Ryuji laughs that they're both crazy; not even Yugi can turn this situation around. He comments that Bakura must usually hide his claws; Ryuji didn't realize that he was so familiar with the Millennium Items. He claims that he'll be the next bearer of the Puzzle, but Dark Bakura laughs, claiming that Ryuji's weak soul would be burnt to ashes the moment he wore the Puzzle, though Dark Bakura doubts he can even solve it. Ryuji tells Bakura to brag all he likes, and he tells Yugi that it's his turn and to roll the dice.

Yugi thinks that all he can do is fight until the end, and Dark Bakura urges him to focus on the dice. Yugi rolls his dice, getting a Magic Crest and two Attack Crests. Yugi wonders how he can beat the 2000 ATK "God Orgoth" with "Duker of Twin Swords", which only has 360 ATK. He recalls that "Duker's" special attack, "Renzokugiri", gets stronger for every Attack Crest he spends. His Crest Pool (six Attack Crests, two Magic Crests, two Trap Crests, and four Movement Crests) has a lot of crests saved up from previous rolls. If he spends all of his Attack Crests, "Duker of Twin Swords" will have 2160 ATK just for one turn; stronger than "God Orgoth". Thinking that this will be his final gamble, he spends all of his Attack Crests, multiplying the ATK of "Duker of Twin Swords" by six, and he orders it to slay "God Orgoth". He declares "Twin Sword Six Renzkoku-giri", but Ryuji laughs, declaring that he knew Yugi would do that. He orders his creature to advance, and his "Anagora leaps in the way of the attack, which slices it in two, much to Yugi's shock. Ryuji laughs that his low-Level monster gave its life to save his ultimate fighter, "God Orgoth", and Yugi has wasted six Attack Crests. Yugi pounds the table in frustration as Dark Bakura watches silently.

Ryuji declares his turn and rolls, then attacks with "God Orgoth", who impales "Duker of Twin Swords" with his massive diamond blade. Yugi gasps that his creatures are wiped out, and Ryuji smiles, thinking that he beat Yugi. Yugi thinks that he's lost, and Ryuji reminds Yugi that his Dungeon Master still has two Life Points left, so he should play out the game until the end. Yugi does, rolling a Movement Crest, Summon Crest, and Magic Crest. With no way to attack, he moves his Dungeon Master out of the way. Ryuji laughs that Yugi can run wherever he likes; he can't escape from "God Orgoth". He attacks Yugi's Dungeon Master, bringing him down to 1 Life Point. Yugi thinks that it's over on the next turn.

Mr. Clown laughs that Yugi's dead, and he praises Ryuji. He picks up the completed section of the Puzzle and hands it to Ryuji, telling him that the Puzzle is his and he asks him to solve it for him in front of his eyes. Ryuji thinks that he's beaten the mighty Yugi, and the Millennium Puzzle has chosen him as its new master. He begins clicking the pieces together, thinking that he'll solve it now and when it's completed, the power of the Millennium Puzzle will be his. But Dark Bakura chuckles, asking if they haven't been through this yet; Ryuji can't solve the Millennium Puzzle. Ryuji comments that Dark Bakura can say whatever he wants, thinking that he's solved harder puzzles than this. Dark Bakura declares that he'll just say this; Yugi will win this game, much to Ryuji and Yugi's shock.

Outside the Kame Game, Jonouchi is shocked to learn that Bakura went into the Black Clown, and he asks if Honda is sure. Honda kneels down next to the barking Blankey (who Jonouchi tells him to do something about) as he states that he saw Bakura go in just a minute ago. Anzu notes that she'd been wondering where Bakura went, and Honda asks where Yugi is, as he'd thought he'd be with them. Sugoroku states that they don't know either, and Anzu adds that they were starting to get worried, much to Honda's surprise. Jonouchi grimly notes that Yugi disappeared at that school too, and now Bakura's gone it. He mutters that something stinks, and Sugoroku wonders if the Black Clown game store isn't what it seems. They decide to get back to the store, and Honda adds that when he saw Bakura, he was wearing the Millennium Ring again. Jonouchi swears in shock, and Anzu asks if Honda is sure. Honda admits that he thinks he saw Dark Bakura on Duelist Kingdom, but didn't say anything since he hadn't been acting weird since then. Jonouchi snaps that something really bad is going on, and they run for the Black Clown as he urges them to hurry.

Yugi looks at the dice in his hand and the field, thinking that he just can't find a way to turn this around; he's down to one Life Point and he doesn't have a single creature on the board. Ryuji meanwhile is having trouble solving the Millennium Puzzle; the pieces are refusing to connect. Dark Bakura laughs that he feels like a broken record; Ryuji can't solve the Puzzle, only Yugi can do it. The word "puzzle" sparks something in Yugi, and he looks at a jagged gap in the Dungeon Path near his Dungeon Master. He rolls his dice, thinking "Maybe..." and begs mentally for stars. Sure enough he rolls two Summon Crests and a Magic Crest, and he celebrates. Ryuji asks what the point is of rolling Summon Crests now; he has one tiny, complicated space on his side of the board, and he doesn't have enough room to summon another creature. Thinking that he'll have to gamble on this dice, Yugi places it down. Ryuji thinks that it's useless; no die can "dimension" into that narrow space. Yugi thinks that the Dungeon squares are like a puzzle, and if this die won't solve it, he'll lose. He declares "Dimension Dice", and the dice unfolds into a jagged zig zag. Yugi cheers that the dice fit, and Ryuji drops the puzzle, shocked that Yugi summoned a creature. Dark Bakura laughs that he'll say it one last time; only Yugi can solve the Puzzle.

But then Yugi gasps in horror; the creature he's summoned, "Armor Wizard Pazoo", has zero ATK.