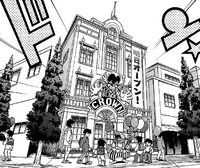 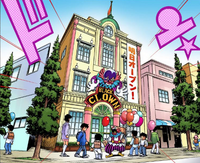 The Black Clown, in the manga, before and after the spelling correction

Black Clown, called Black Crown in earlier printings, is the name of Duke Devlin's shop. In the manga, the Black Clown is owned by his father, Mr. Clown. The shop is the rival game shop to the Kame Game.

Black Clown, in the English anime

In Yu-Gi-Oh! - Episode 046, Grandpa Muto is disgusted because his game shop has new competition. Against his wishes, Yugi decides to sneak over and check out the competition with Téa. Outside the building, folks are giving out publicity posters about the shop's new game, Dungeon Dice Monsters. Meanwhile, the store's owner, Duke Devlin, discusses getting revenge against Yugi. He claims that Yugi only defeated Pegasus in Duelist Kingdom by cheating.

After school, Joey Wheeler challenges Duke to a Duel, with the loser being forced to do whatever the winner told him for a week. Duke agrees, but having no Deck, insists that they construct fresh decks from Booster Packs. Joey agreed, and after a short yet close game, Joey loses, and Duke forced Joey to dress up in a dog suit and do demeaning actions. Yugi, infuriated, challenges Devlin for Joey's freedom. Devlin says that he will take him on in Dungeon Dice Monsters, if Yugi agreed to forfeit his title as King of Games and promise never to play Duel Monsters again if he lost. Yugi agreed, and in spite of Duke hardly giving Yugi enough instruction to play the game, and using his familiarity and skills with the game to take advantage of his ignorance, Yugi was able to prove to him that he was worthy of the title by defeating him, leading Duke to apologize profusely for thinking that Yugi cheated when he really played honestly and fairly.