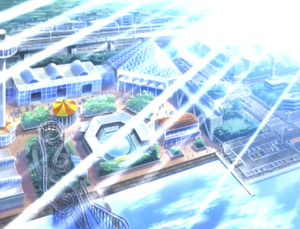 Domino City Aquarium is a location in the Yu-Gi-Oh! manga and anime. In the Japanese anime, the sign reads Domino Aquarium; in the English anime the text is replaced with a number of yellow fish.

In an outdoor tank, Mako Tsunami netted himself a huge catch of fish from an outdoor tank at an aquarium. Just as he was exulting over what a good fisherman he was, he fell into the tank, and came face to face with a whale, which rose out of the tank with Mako perched on it. Sachiko angrily asked Mako what he was doing. He tried to explain that he was just catching his lunch when this huge beast attacked him. The worker replied that they were in the aquarium and that Mako stole the whale's lunch. He apologized, but the worker collapsed, having contracted a fever. Mako jumped out of the whale's mouth to catch her, and the worker explained that she had to perform in the Ocean World show. Mako told her not to worry—he'll take over for her, since he was one with the sea.

As Marik Ishtar was approaching the Battle City's center, Yami Bakura sensed the same dark force that controlled Bandit Keith. Just then, Joey Wheeler, Téa Gardner and Tristan Taylor appeared, asking Bakura if he's there to check out the tournament action. Bakura shifted to the guise of Bakura Ryou and asked how things were going; Joey responded that he already won four Locator Cards and that he is looking forward to facing Yami Yugi in the finals, but first, he must beat another Duelist. Téa noticed a sign advertising today's Ocean World show, with a drawing of Mako with a whale. Tristan recognized him and suggested that Joey Duel Mako. Joey agreed, and ran to find him to challenge him to a Duel. The others ran after him, leaving Bakura behind. Once Joey and the others were out of sight, Yami Bakura chuckled evilly, commenting that while Joey was out there playing games, he would be the most powerful being in the world.

Joey and the others ran into the Ocean World stadium, where they saw Mako riding on the back of the whale. Several Rare Hunters sat down in the audience, as Mako and the whale performed several tricks. Joey called out to him, and Mako greeted Joey, just as the whale rose up out of the tank, with Mako standing tall on the top of its head. Téa asked what he was doing performing at the aquarium—they thought he'd be Dueling. Mako explained that he did come here to Duel, but he needed the kinship of the sea first. Joey then challenged Mako to a Duel. Mako was dismissive at first, displaying his four Locator Cards, and Joey responded with his own four. Mako agreed to Joey's challenge, saying they'll give the cheering fans a show to remember. The kids in the crowd were delighted to see a Duel Monsters Duel as part of the show. Mako and Joey agreed to bet two locator cards on the Duel—whoever won would go to the finals. They faced off on a concrete island in the middle of the tank, while Téa, Tristan, and Grandpa found seats in the stadium to watch.

The aquarium appears in Yu-Gi-Oh! The Sacred Cards. The player must cross the bridge underpass and defeat Strings to unlock this area.

Mako Tsunami defeated Joey Wheeler at the aquarium. The player then Dueled Joey in order for Mako to consider Dueling him, then Dueled Mako to win a Locator Card. They player could also optionally Duel a number of generic Duelists.

When Joey and Tea Gardner were taken captive by the Ghouls, the player defeated some minor Ghouls at the aquarium.