Yu-Gi-Oh! The Sacred Cards, known as Yu-Gi-Oh! Duel Monsters 7: The Duelcity Legend in Japan, is an RPG-style game for the Game Boy Advance.

The story of the game loosely followed the Battle City story arc of the anime and manga, with adjustments to allow the player to act the part of a major character and participate all the way into the Battle City finals.

The game automatically cuts to the ending sequence immediately after the defeat of Marik Ishtar, with no option to save. Because of this, any money or rare cards earned in the final duel are irrelevant, and the player never has an opportunity to use The Winged Dragon of Ra without the use of a game-hacking device. The only way to do this normally is to allow Marik to Summon Ra and destroy it (or somehow discard it from the hand), then Special Summon it from the graveyard. Even in the English version of the game, most of the cards have their original artworks, such as "Soul of the Pure" and "Last Day of Witch".

A Konami 'cameo' in this game is the Miracle Moon music in the arcade, which is taken from the Beatmania series of games.

The cards removed, since Duel Monsters 4 include five sequential recolored counterparts and a number of cards that debuted in Duel Monsters 3 or 4, which were not released in the OCG at the time.

The new cards include:

The "manga", "anime", and "video game previously" columns below indicate whether or not the card had previously appeared in the respective medium. The "OCG later" column indicates if the card was released in the OCG at some point after the game's release. 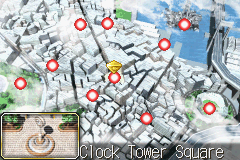 The map of the city

The game is set in Domino City. All the locations are based on places from the manga, with the exception of the graveyard, which is based on a location from the anime. 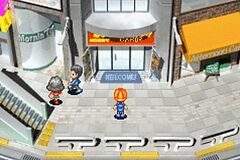 The game starts when the player and his two friends, Yugi Muto and Joey Wheeler are preparing for the Battle City tournament of the card game, Duel Monsters. In order to win the tournament, the player must obtain six Locator Cards which are received after beating certain characters in Duel Monsters. After all of the locators are obtained, the player is entered into the finals.

However, a mysterious person named Marik has a gang of card thieves, known as the Ghouls, which he is using to obtain the three Egyptian God cards to bring the world to darkness. Marik's Rare Hunters eventually take over the whole city. Even the owner of the card shop works for Marik and tries to kill the player. Then, the player meets Ishizu Ishtar, who challenges them to a game of Duel Monsters, to see if he is strong enough to wield an Egyptian God card. After she is beaten, the player must beat Seto Kaiba, the person that organized the tournament, in order to obtain the first God card.

After the player gets into the finals which take place on a blimp, he Duels Marik. After Marik is beaten, it is found out that it was not really Marik. It was actually one of Marik's servants. The real Marik was the person the player met earlier in the game that became one of Yugi's friends: Namu. Then, Marik starts stealing the souls of those he beats. After Marik defeats Kaiba, the player must challenge Yugi. After Yugi is beaten, the player must face Marik. The game can't be saved after beaten so once the game is beaten, you will restart at the last save point.

The player begins the game with a Deck of 40 cards and a Trunk of 42 spare cards.

Each opponent has a pool of ante cards for each occasion that the player battles them. However, if the player wagers a low-level ante card, a different pool of cards is used. Each pool assigns a probability of being selected to each card. If the player wins the Duel, one of the cards from the pool is randomly awarded to them. However there is a glitch that gives the player a 1/2048 chance of winning nothing in an ante Duel. 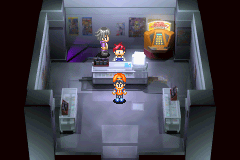 The interior of the card shop. The password machine is at the back.

Fifty random cards appear in the card shop, each time the player wins a Duel. Although, there is a glitch where there is a small chance of less than fifty being added. Each card is given a probability out of 30,000 of appearing in the shop. However the random number generator is biased, making some cards slightly more probable and some less probable than their assigned probability.

The player can also make certain cards appear by entering their 8-digit password into the password machine in the back of the shop.

Each card in the shop costs a number of Domino, equal to the Deck Cost of the card times four, minus the amount currently in the shop; Purchase price = DC * 4 - amount in shop.

The player can also sell cards to the shop for half the price they would be able to purchase them at; Sell price = DC * 2 - amount in shop.

Certain cards are given to the player after completing certain tasks.

Cards obtained temporarily last for the duration of the Duel.

A Ritual Summon is conducted by activating a Ritual Card and offering three monsters on the field as sacrifices. A new monster will then be Summoned. Most Ritual Cards require one specific monster as a sacrifice, while the other two sacrifices can be any monster. The two exceptions to this are "Gate Guardian Ritual" and "Ultimate Dragon", which require three specific sacrifices.

There is a password machine in the card shop. Players can enter the 8-digit passwords from OCG and TCG cards into this machine to make them available in the shop.

There are also certain passwords that have effects other than putting a card in the shop.

The game was originally released in Japan on July 4, 2002.

The game was released in North America on November 4, 2003. The following changes were made:

The game was released in Europe February 6, 2004. The following changes were made:

The game was re-released in North America as part of the Yu-Gi-Oh! Double Pack on February 22, 2006. The following changes were made:

Differences from the manga and anime[edit]

The Sacred Cards is based on the events of the Battle City tournament from both the Yu-Gi-Oh! manga and anime. It is the first video game to incorporate plot details that were original to the anime.

Yu-Gi-Oh! The Sacred Cards received "mixed" reviews according to video game review aggregator Metacritic.[1] It was criticized for its shortness.