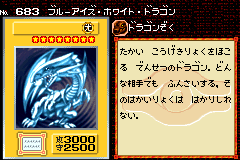 In addition to the in-game numbering shown to players, Duel Monsters 5: Expert 1 features an internal numbering system that largely matches the numbering used in Duel Monsters 4: Battle of Great Duelist and the earlier Game Boy/Game Boy Color titles, though it starts from 000 instead of from 001. This number is shown in the "I#" column in the table.

A gallery of cards is also available.