Fiend ( Akuma, "Demon") is a monster Type consisting of cards resembling demons and devils, as well as many other vile, twisted beasts or mischievous beings. Fiends are primarily DARK-Attribute, though there are a relative handful of Fiends belonging to other Attributes. Fiends are one of the most established and powerful Types in the entire Yu-Gi-Oh! franchise, and have many archetypes within them; as such, there is no specific Dueling strategy built around them and their play style - the majority of Fiend-related strategies focus on offensive tactics and destroying the opponent's cards, as well as pressuring the opponent by cornering them with stun, lockdown, banishing, and/or milling effects.

Fiends are most notably used by Yami Bakura, Yami Marik, Declan Akaba, Akira Zaizen, and Roa Kassidy. Some of the most well-known monsters used by Yugi Muto, Yami Yugi and Jack Atlas' are Fiends, as are many used by Sylvio Sawatari (specifically in the final Deck used). Fiends are also generally used by minor antagonistic characters such as PaniK and Dr. Genome. 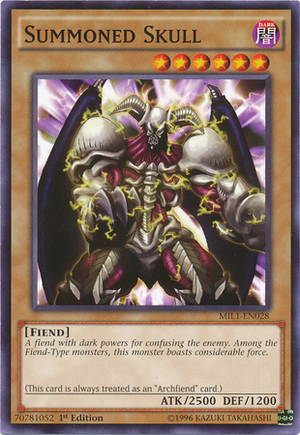