"Kuriboh" (クリボー Kuribō) is an archetype of monsters used throughout the Yu-Gi-Oh! franchise. The archetype also contains a sub-archetype, "Winged Kuriboh". 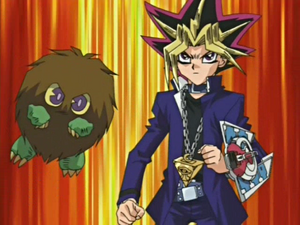 In Yu-Gi-Oh!, Yugi Muto started with "Kuriboh", which he could discard to reduce Battle damage that he would take from his opponent to 0 as well as use "Multiply" to protect him from battle. His manga counterpart uses "Clear Kuriboh" in Yu-Gi-Oh! The Dark Side of Dimensions. He can discard it to negate a damage-dealing monster effect or banish it from the Graveyard to potentially prevent a direct attack. 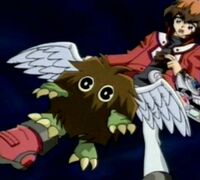 In Yu-Gi-Oh! GX, Jaden Yuki's Deck includes a "Winged Kuriboh" that he received from Yugi. His Kuriboh strategy focuses on Summoning "Winged Kuriboh LV10" with "Transcendent Wings" and Tributing it to wipe out the opponent's Attack Position monsters and inflict damage. His manga counterpart also has "Winged Kuriboh LV9", which restricts the use of Spell Cards. When his "Winged Kuriboh" is destroyed, all Battle Damage he takes that turn becomes 0.

In the Yu-Gi-Oh! 5D's manga, Yusei uses "Junkuriboh" in his Deck. He can discard it to negate any damage that would make his LP zero and destroy that card.

In Yu-Gi-Oh! ZEXAL, Yuma Tsukumo obtains "Rainbow Kuriboh" during his time in Astral World, which was his father's card, and quickly forms a bond with it.

While no "Kuriboh" monsters make an appearance in the Yu-Gi-Oh! ARC-V anime, the manga has Yuya using "Performapal Kuribohble", which prevents a direct attack, negates battle damage, and recovers life equal to the negated damage, as well as "EnterMate ClassiKuriboh" and "EnterMate BaroKuriboh", a pair of Pendulum Scales.

In Yu-Gi-Oh! VRAINS, even though he does not use it in his Main Deck, Yusaku Fujiki used three copies of "Sphere Kuriboh" as shields during his infiltration of SOL Technologies' data bank. He later obtains "Linkuriboh", which reduces the ATK of an opponent's attacking monster to 0 until the end of that turn, by Tributing "Linkuriboh". When Ai starts Dueling on his own, he uses a darker version of "Linkuriboh" called "Linguriboh".

In Yu-Gi-Oh! SEVENS, Yuga Ohdo uses three "Kuribot", which can retrieve one another from Yuga's Graveyard to refill his hand.

"Kuriboh" monsters are generally defensive in nature, and on their own, they tend to prevent battle damage from occurring to the user. However, some of their support cards allow them to rapidly turn the tables upon the opponent, such as the powerful "Winged Kuriboh LV10" and "Detonate". So far, all non-monster support cards for "Kuriboh" monsters are Quick-Play Spell Cards allowing them to function quickly in a themed Deck.

The monster "Dystopia the Despondent" works very well with "Kuriboh" decks as a majority of them are level 1.