Yu-Gi-Oh! VRAINS[4] is the sixth Yu-Gi-Oh! anime series and the fifth main spin-off series, which began airing in Japan on May 10, 2017. It airs in Japan every Wednesday at 6:25 pm Japanese Standard Time instead of the usual Sundays as with previous series did. This series airs alongside reruns of Yu-Gi-Oh! ZEXAL as part of BS Japan's Yu-Gi-Oh! Duel Hour block. It later airs alongside reruns of Yu-Gi-Oh! 5D's starting from November 2017. The final episode aired on September 25, 2019.

On June 1, 2017, Crunchyroll began airing the show with subtitles to completion, which became available in American English, German, Brazilian Portuguese, and Mexican or Latin American Spanish. The English dub had a sneak preview at the end of a special screening of Yu-Gi-Oh! The Movie: Pyramid of Light in theaters where the first episode was aired; it aired in Canada every weekend day at 1pm on Teletoon - East starting from September 2018. The second season began airing with a different runtime; every Sunday at 1pm on Teletoon - East starting from September 2019. After the conclusion of its first arc on February 16, 2020, the second season resumed airing in the same format on April 5, 2020, and concluded on June 21, 2020. The third season in the dub also included episodes from the second season, beginning on September 6, 2020 and went on hiatus after Episode 108 - Smash and Mash aired on on Teletoon.[5] The rest of the third season first resumed airing in Australia on 9Go! every weekday at 6:30am, continuing with Episode 109 - AI vs Ai on August 27, 2021 and concluding on September 13, 2021. In the United States, the English dub began airing on Pluto TV both as a streamed show and via video on demand on November 22, 2020, airing the first two episodes on the same day.[6] In Brazil, the Brazilian Portuguese dub began airing on Pluto TV as a streamed show on February 1, 2021.[7]

The series stars Yusaku Fujiki as the main protagonist, and takes place in a high-school setting, featuring Virtual Reality Duels in a cyberspace constructed with LINK VRAINS, the latest in virtual-reality technology. As with the previous three spin-off series (5D's, ZEXAL, and ARC-V), VRAINS introduces and focuses on a new type of Summoning: Link Summoning, though the second season gradually reintroduces the previous Summoning methods, with the exception of Pendulum Summoning. 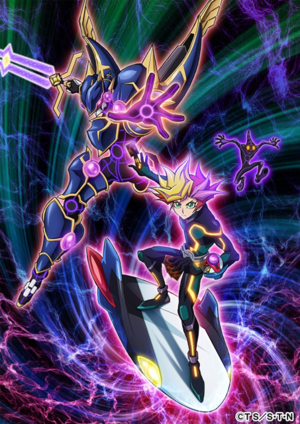 Promo art of Yusaku Fujiki as Playmaker, and "Decode Talker".

The series is based in a world roughly ten years from now, where a massive Virtual Reality Network called LINK VRAINS has been established. It's a suspenseful, thriller-style story in which Yusaku Fujiki Duels in order to learn the truth of the events surrounding his past.[8]

There is a city where network systems have evolved: Den City. In this city, with the advanced network technology developed by the corporation "SOL Technologies", a Virtual Reality space called "LINK VRAINS" (Link Virtual Reality Artificial Intelligence Network System) has been developed. By using LINK VRAINS which was built inside the Network System, Duels unfold where Duelists change their appearance separate from their real life identities, and in this VR Space people became excited over the latest way to Duel. 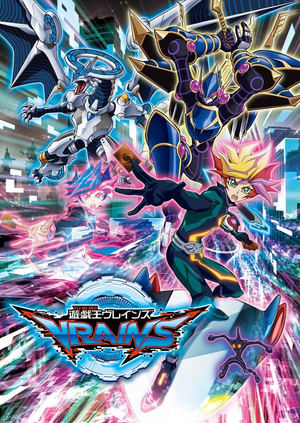 However, in "LINK VRAINS", a mysterious hacker group that hacks via Dueling has appeared: The Knights of Hanoi. Their goal is to destroy the "AI World" known as "Cyberse" that exists somewhere in the depths of the Network.

However, there is one Duelist who stands against the threat to "LINK VRAINS". His name is "Playmaker". He has become famous in the Network World for crushing the "Knights of Hanoi" in fierce Duels, without mentioning his name. But the true identity of "Playmaker" is ordinary high school student "Yusaku Fujiki", who pursues the "Knights of Hanoi" that appear in VRAINS in order to find out the truth of an incident that happened in his past.

VRAINS is a combination of the acronyms VR, AI, and NS, standing for Virtual Reality, Artificial Intelligence, and Network System.[9] The acronyms are displayed prominently during the English opening.

As of episode 14, Masahiro Hosoda stepped down as director and was replaced by Asano Katsuya. As of this episode, the backgrounds of LINK VRAINS and the Link Summoning methods were changed and added more detail, and the point gauge for Link Monsters depicts the monster's Link Arrows. [1] As of the same episode, the series is under the supervision of Satou Tatsuo (best known as the director of the Martian Successor Nadesico series).[10]

Production issues behind the scenes forced the show to include a large number of "recap episodes", which the series has become notorious for. Asano Katsuya took to Twitter to apologize for these episodes after the fourth such episode; explaining that they were needed to allow them to slowly improve the series.[11]

The series appears to have changed direction during development significantly. When it was first revealed at Jump Festa 2017, Yusaku was described as a high-schooler and a hacker who doesn't like standing out, but who got drawn into encounters with people as he tries out Dueling for once. In the series proper, Yusaku is an experienced Duelist whose social stigmas stem from both his trauma and his wish to keep others out of his fight. The show's theme was said to be "Take a step forward, and try!", on the premise that kids should start to try things out instead of just giving up at the first try due to being overwhelmed by information.[12]

Japanese opening theme 1: With The Wind

Japanese ending theme 5: Are you ready?