From Yugipedia
Jump to: navigation, search
This article is about the board game based on the spin-off anime series. For other uses, see Capsule Monsters (disambiguation). 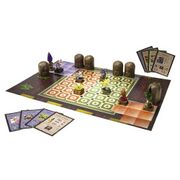 The object of the game is to defeat your opponent's King. The first player to reduce their opponent's King's Hit Points to 0 is the winner. The Game has two different levels, the Basic Game for beginners and the Advanced Game for more experienced players.

The game was little known and production was apparently discontinued after the release of just a two-player Starter Set and one Booster Pack.