In Yu-Gi-Oh! R and in the Yu-Gi-Oh! 5D's anime, the Wicked Gods and the "Aesir", respectively, are also Divine-Beast-Type monsters, unlike their real-life counterparts.

Prior to the release of the legal prints of "Obelisk the Tormentor", "Slifer the Sky Dragon", and "The Winged Dragon of Ra", Divine-Beast was not a legal Type. With their release, it can now be declared with cards like "DNA Surgery".

For many years there was no explicit support for Divine-Beast monsters, though "Ra's Disciple" and "Holactie the Creator of Light" both support the primary three monsters with this original Type by name. Additionally, because all monsters with the original Type of Divine-Beast are also DIVINE-Attribute, they are also supported by cards that support DIVINE, such as "Mound of the Bound Creator" and "The True Name". 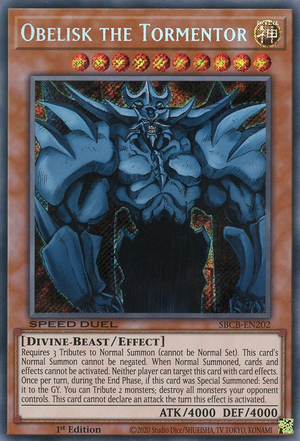