From Yugipedia
Jump to: navigation, search
For other versions of this character, see Odion (disambiguation).

Odion, known as Rishido (リシド, Rishido) in the Japanese anime, is the adoptive older brother of Marik Ishtar and Ishizu Ishtar. Throughout the series he remains loyal to Marik, even when mistreated. In the Singaporean dub, he has been called by three names: Rishid, Rishido, and Odion. 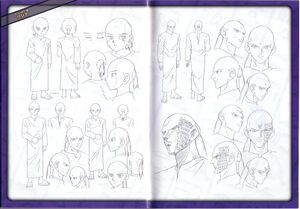 Odion linework in the past.

Odion wears golden earrings that resemble an ankh. He has a tattoo in the dub/carving in the original of hieroglyphics on the left side of his face, from just touching his left ear to halfway through his left eye in width and from the top of his forehead to just below his chin in length; in certain scenes from a different angle, the tattoo appears as if it only touches his eye like his ear, instead of going through it. He has dark skin, green eyes and mainly a bald head, with his only hair being a large, long black ponytail coming out of the very back of his head.

He wears, throughout most of the Battle City tournament in both season 2 and the second part of season 3, the same purple hooded cape with the Eye of Anubis on the hood and a gold chain that Marik Ishtar originally wore as well. Odion has, underneath the cape, a long-sleeve dark purple sweatshirt, black pants, and two rather large dark belts, which he also wears in season 5, though without the cape, at the Egyptian airport. He also, before his true identity was revealed, since he was posing as Marik beforehand, had a fake Millennium Rod in the Battle City tournament finals.

Odion is normally quite quiet, remaining loyal to Marik Ishtar despite being mistreated at times throughout season 2 and season 3, because of 3 reasons: Marik had always treated him as a brother, Odion's promise to Mrs. Ishtar that he would take care of his adoptive siblings, and Odion's presence being necessary to keep Marik's alter ego under control.

During his duel with Joey Wheeler, as Odion was pretending to be Marik to divert attention, he was louder and more arrogant, but still remained relatively polite and composed.

Odion is the adoptive brother of Marik Ishtar and Ishizu Ishtar. Abandoned in the desert as a child, Odion is found by the current tombkeeper's wife and taken in. Odion's mother loved him as her own, but his adoptive father only saw him as a servant. As Odion found out that they needed a son to carry on their legacy, Mrs. Ishtar suggested to her husband since they had no children of their own for Odion to be the heir, and although Mr. Ishtar wanted only a biological son to carry on their legacy, he finally agreed to give Odion the tombkeeper's initiation after Mrs. Ishtar stated that fate had brought him to them. But Odion's father still desired his own son, since after their first child was a girl (Ishizu), Mr. Ishtar declared all they needed now was a boy since a male had to be the heir of the tombkeepers; however, his wife still suggested to Odion to have the tombkeeper's initiation after giving birth to Ishizu, which Odion agreed to have, but when Marik was born before Odion's twelfth birthday (tenth birthday in the Japanese version), their father declared him his heir. His mother died during birth (this isn't stated in the dub, but is implied), and Odion held her hand as she died, her last request that he take care of his brother and sister.

Marik and Odion were close siblings, but Odion at the time harbored a resentment for him as the true heir to the tombkeeper's and legitimate son of his parents. When Marik was bitten by a cobra and took ill, their father beat Odion, furious he allowed Marik to be harmed, and ordered he not leave Marik's bedside until he recovered. Odion takes a dagger to Marik's room with the intent to kill him in his sleep (this is edited out in the dub, along with his resentment for Marik). Marik awakens and murmurs "brother", causing Odion to drop the weapon in shock: Marik sees Odion as his brother, despite the fact they are not blood related, and this took away his resentment to Marik, but not his desire to be a tombkeeper.

When Marik's father plans to have the tombkeeper's initiation forced upon his son, Marik admits to Odion he is terrified. Odion asks his father that he be chosen instead, as Marik is young and scared. His father denies his request and refuses, ordering Odion to never ask again. When Marik is taken to have the ritual performed, Marik is seen asking Odion for help, but he stands silently, knowing he cannot interfere. Odion, fearing what might happen to him as a result, performs his own ritual, carving the hieroglyphics on his face with a knife as proof of his loyalty to Marik (in the dub, he tattoos the hieroglyphics on his face). This mark later becomes critical to sealing away the true darkness that becomes seeded in Marik during the ritual: Marik's other personality. When Marik and Ishizu sneak away on a trip to the surface, Odion remains behind to keep their father from discovering this. When he does so, Odion is savagely beaten, a sight that Marik and Ishizu return home to. Their father whips Odion, and when Odion falls unconscious (this is edited out in the dub, so it isn't known how Odion fell unconscious), Yami Marik is released. Dark Marik seizes the Millennium Rod from his father and kills him. (In the dub, he is sent to the Shadow Realm.) Odion wakes up as Shadi appears to warn of the return of the Pharaoh as Marik regains his senses. Odion, refusing to let Marik discover the truth of his father's death, tells Marik that Shadi killed him.

Odion remains by Marik's side for years afterwards, even when Marik betrays the tombkeeper's, presumably because abandoning him would cause Yami Marik to emerge again. He becomes the second-in-command of the Rare Hunters (Ghouls in the Original) with Marik. When Marik arrives at Battle City, he has Odion Duel and collect 12 Locator Cards, enough for both of them to enter the finals. (They each needed 6 to participate) Marik enters under the guise of Namu while he has Odion pretend to be Marik, drawing suspicion away from the true Marik (neither Yugi or Kaiba had ever seen Marik in person, having only communicated with them via his Millennium Rod through his Rare Hunters. However, Yugi's friends Tea, Joey, and Bakura Ryou unknowingly had, when they met Marik "helping" Bakura, but he used the name Namu in order to gain both their and the rest of their friends' trust). To help the deception, Odion is armed with a fake version of the Millennium Rod and a copy of Marik's Egyptian God card, The Winged Dragon of Ra (although Odion is not aware Marik has placed the card in his Deck). 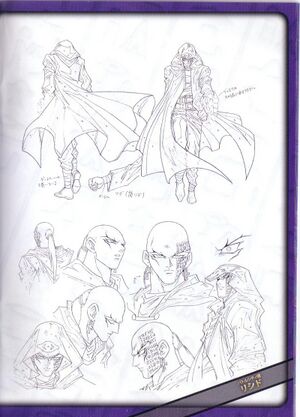 Odion appears during Yami Yugi's Duel with Yami Bakura, and pretends to use the fake Millennium Rod to make the spirit abandon his host. This is meant as a ruse to have Yami Yugi forfeit the Duel rather than harm his friend. It fails when Yami Bakura repossesses his host and betrays Marik, since for the time being he could not risk Bakura being injured. Odion then Duels Joey Wheeler. During the Duel, Joey's friendship with Yugi and his love for his sister Serenity reminds him of his mother and the relationship he once had with Marik, while his brother continues to order him through the Millennium Rod.

Odion draws "The Winged Dragon of Ra", and is horrified to see it as he knows its dangers and that he is not worthy to use it. Joey begins to suspect that Odion is not Marik: Marik was cruel, cheated, and was a general low-life to Joey, but Odion has been Dueling with honor as a True Duelist, even respectfully calling Joey "Mr. Wheeler". Odion was about to win the Duel against Joey; however, Marik, afraid his deception may be unmasked, commands Odion to summon the God card to dispel any disbelief. Odion does not want to risk the task, but Marik convinces him that if he can do so and control Ra, he will have proven himself a true tombkeeper. Excited by the thought of being accepted into the clan, as he always wished, Odion summons the God Card, but factors, such as his lack of a real Millennium Item and the card being a fake, (although this is originally unknown to Odion), incurs the god's wrath, striking Odion and Joey with lightning. Heartbroken, Odion did not bother to evade Ra's strikes, and was struck down. Before losing conscious, he saw, to his horror, Yami Marik's awakening, and confessed to Joey that he is not the real Marik and he had a good Duel with him. Now comatose, Odion is taken to his room to rest as Yami Marik emerges.

During the rest of the Battle City arc, Yami Marik returns to Odion's side again and again to kill him (in the Dub, send him to the Shadow Realm), but is unable to complete the task for a multitude of reasons. When Yami Marik faces Yugi in the final Duel, Odion is awakened from his sleep by the fading spirit of the true Marik, who thanks Odion for remaining by his side for so many years and being a faithful brother. Odion stumbles to the top of the Duel Tower, calling for Marik to fight his dark side. With Odion's encouragement, along with Yugi's Ragnarok card, Yami Marik is destroyed and Marik regains control of his body.

Odion returns to Egypt with his siblings. He, Marik, and Ishizu led Yugi and his friends to the Tablet of Lost Memories, where Yami Yugi must relieve his past and enter the World of Memories.

After Yami Yugi regained his memories, they led Yugi and his friends to the Shrine of the Millennium Stone, to witness the Ceremonial Battle, and watch Atem pass on to the afterlife.

Odion uses an Egyptian-Themed Trap Deck comprised primarily of powerful Trap Cards, with the strategy dubbed as "Trap Hell". His signature card is the Field Spell "Temple of the Kings", which allows him to activate Trap Cards on the same turn they are Set, while limiting the amount of Spell and Trap Cards his opponents can play; it also allows him to Summon his strongest monster, "Mystical Beast Serket". Odion Duels passively due to his reliance on Traps, only going on an offensive once his Trap Monsters, "Embodiment of Apophis", are activated. In the Battle City Finals, Odion's Deck also contained a counterfeit version of "The Winged Dragon of Ra" placed in his Deck by Marik, though Odion was reluctant to use the card.

Odion's "Trap Hell" strategy has two components: The first the use of several Trap Cards to counter the opponent's attacks and Spell Cards, leaving them unable to mount an offense or counter themselves; the second component is the psychological pressure of constantly having plays neutralized, aided by the surprise factor of the Trap Cards. This causes the opponent to become either overcautious or else too impatient to think straight, losing focus and eventually making reckless decisions - Joey in particular nearly loses his duel against Odion as a result of this.

Odion has a considerable number of off-screen victories with the Deck, having collected ten more Locator Cards for himself and Marik to enter the Battle City finals.

Odion's signature card is shown to be Slate Warrior.