Johnson, known as Chikuzen Ooka in the Japanese version, was the legal adviser for KaibaCorp, an expert lawyer, and a member of the Big Five.

Johnson is tall, wears glasses and has dark hair. Like the other members of The Big Five, he wears a business suit. In the virtual world, he takes the appearance of Judge Man.

Johnson is dishonest and sneaky. In his law career he would deceive the court and in his Duel with Joey Wheeler, he would manipulate any of Joey's chance-based turns so that he would end up with extremely bad luck.

In the English dub, Johnson speaks fairly slowly and in a formal, conceited manner. He often makes legal puns to reflect his career as a lawyer. When he is in the form of Judge Man, he has a robotic sounding voice.

Johnson once convinced a jury that a man who suffered from hydrophobia was guilty of stealing a boat; an example of how he "convinces people that lies are truth". He worked as a legal adviser at KaibaCorp. Johnson, along 4 other KaibaCorp employees formed a group known as the Big Five.

Seto Kaiba, the adoptive son of the head of KaibaCorp, Gozaburo Kaiba, convinces the Big Five that Gozaburo is mistreating them and he'll help restore them to their former power. The Big Five agree, and thus buy 49% of KaibaCorp. Combined with 2% that Gozaburo had previously given to Seto for a test to prove his business skill, the Big Five vote out Gozaburo and vote in Seto as the president of the company.

However, Seto quickly backs out on their deal, stripping them of their power and leaving the Big Five little more than figureheads and consultants. Furious over their betrayal, the Big Five strike a deal with the president of Industrial Illusions, Maximillion Pegasus in an attempt to overthrow Seto. If Pegasus defeats Seto and Yugi Muto in Duels, then they will use their 49% to vote Pegasus into power of the company by kidnapping Seto's brother Mokuba Kaiba, who has been entrusted with the security codes to the two percent the Big Five need.

The Big Five watches the Duel between Yugi Muto and Maximillion Pegasus on their monitor. The Big Five and Pegasus' plan fails, after Pegasus is defeated by Yugi. In the manga, Johnson and the rest of the Big Five are fired by Seto and are never seen again. 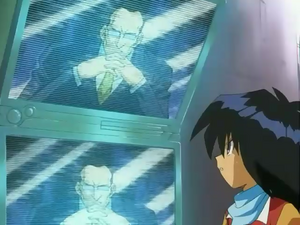 Johnson on the monitors in Legendary Heroes.

However Kaiba is rescued by Mokuba, Yugi, Joey, and Mai Valentine. The Big Five reprogram the game and set the "Mythic Dragon" as the final boss. However it is defeated by Yugi and Kaiba's "Dragon Master Knight".

After losing in Legendary Heroes, the Big Five got trapped in the virtual world, instead of Kaiba. Here they meet up with Noah Kaiba. Having Seto as a common enemy, they made plans for revenge.

During the Battle City tournament, Noah has the KaibaCorp blimp sucked into an undersea fortress, where the virtual world's main servers are. They force Seto and Mokuba Kaiba, along with Yugi and his friends into the virtual world again. Using an altered set of Duel Monsters rules, involving Deck Masters, the Big Five Duel their enemies in the hopes of stealing their bodies to escape the virtual reality. 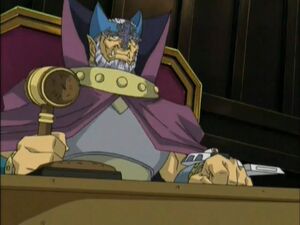 To lure Joey Wheeler into a Duel, Johnson disguised a setting of the blimp and disguised himself as Mai Valentine until he reveals himself (He was the only member of the Big Five to not introduce himself in Deck Master form to his opponent). He Duels Joey Wheeler in a courtroom setting. Johnson claims that Joey is on trial for gambling too much with his Deck and takes the form of "Judge Man", who he also uses as his Deck Master. During the Duel, Johnson secretly rigs Joey's dice rolls and coin flip in his favor. Noah later teleports in and threatens to disqualify him for cheating while exposing to Joey that Johnson tampered with his dice roles. Joey asks that Noah let the Duel continue, and Noah does so before teleporting away. Joey plays another game of chance with Johnson in which he loses one of the true or false questions he claims to be an expert in - picking a monster card rather than a magic card, thus allowing Joey to transfer the card's ATK to his "Flame Swordsman" to strength his monster, enabling Joey to win the Duel.

Johnson, along with Gansley, Crump, and Leichter, having failed to win their targets bodies, go behind Noah's back and attempt to steal the bodies while in their Deck Master forms. They chase down Duke Devlin, Serenity Wheeler, and Joey. As they argue over who gets which bodies, Noah makes contact and tells them off. Since Nezbitt didn't rightfully take Tristan Taylor's body (as he had actually lost the Duel despite beating Tristan), Noah allows the Big Five to share Tristan's body in order to Duel Yugi. Should they win, they would get their freedom.

The Big Five face Yugi and Joey, using Tristan's body. The 5, each switch control and Deck Master throughout the Duel. Johnson only takes full control for 1 turn, where he uses his Deck Master effect to destroy Yugi and Joey's monsters, although he also advised his colleagues to focus on Joey in the belief that he would be the weak link in the Duel. Towards the end of the Duel, the Big Five uses "Dragon Revival Ritual" to combine their Deck Masters into the "Mythic Dragon" again. The dragon is destroyed by Yugi and Joey's "Mirage Knight", but the Big 5 use "A Deal with Dark Ruler" to make "Berserk Dragon" their Deck Master. Ultimately, it is destroyed by "Dark Magician Knight", costing them the Duel.

Noah refused to give the Big Five any more chances after that. In the original version, Noah deleted Johnson and the rest of the Big Five. In the English dub, Noah imprisoned the Big Five in the different corners of the Virtual World until it is destroyed.

Johnson uses a Fusion Deck that relies on increasing his Life Points in order use his Deck Master's ability, "Clear the Courtroom", which can destroy all monsters on the opposing field at a cost of 1000 points, inflicting 500 points of damage to the opponent for every monster destroyed.