Slifer is a large, serpentine red-skinned, black-bellied dragon with spikes running down its body. Its wings are bat-like in form, with two thumb claws. Slifer's head has two mouths; the bottom jaw of the smaller top set is part of the top jaw of the larger set. The last tooth at each cheek is larger than the others. Slifer's head is crested with four spikes protruding horizontally, and two larger ones from the back of the head curving vertically; the sapphire common to the Egyptian Gods is nestled at the front of the crest. Its tail crest is shaped in a similar manner, but with a single flattened spike at the tip rather than two spikes. Slifer has short limbs with three-toed feet. It is the only Egyptian God whose appearance remains constant in the anime between the present and the Memory World arc.

Slifer is one of the three Egyptian Gods, along with Obelisk the Tormentor and The Winged Dragon of Ra. These monsters were only capable of being summoned by the Pharaoh.

When Atem spotted Bandit King Bakura fleeing from the palace after he had attacked Aknadin, he pursued him on horseback. Atem allowed Slifer to be struck in order to protect innocent civilians from Diabound's attacks and then got Slifer to force the battle into the sky. However Diabound was able to disappear into the darkness and attack Slifer from behind. Atem pretended to surrender his Millennium Puzzle in order to distract Bakura while he had Slifer sneak up on him. However Bakura had Diabound make a similar sneak attack on the Pharaoh. After the priests arrived, Aknadin stabbed the stone slab of Slifer, allowing Diabound to destroy it. By defeating Slifer, Diabound gained its power, including its "Thunderforce Attack".

The Egyptian Gods as cards.

3000 years later, Maximillion Pegasus created cards depicting the three Egyptian Gods for his game Duel Monsters. However the souls of the Gods came to dwell in the cards, making them powerful weapons, and they struck down those involved with their discovery; Slifer attacked the cameraman, materializing around the building he was working in. On realizing this, Pegasus regarded their creation as one of his greatest mistakes. He tried to destroy the God Cards, but could not bring himself to do it, so he had the Egyptian supreme council of antiquities bury the cards in different locations in the Valley of the Kings. The Rare Hunters managed to steal the "Slifer the Sky Dragon" and "The Winged Dragon of Ra" cards. However the Egyptian supreme council of antiquities was able to prevent them finding the "Obelisk the Tormentor" card. Ishizu Ishtar, from the council, later gave it to Seto Kaiba, so that he would host the Battle City tournament to retrieve the other two.

The leader of the Rare Hunters, Marik Ishtar, entered the Battle City tournament with the "Slifer" and "Ra" God cards. Using Strings as his puppet, he Dueled Yami Yugi in the preliminaries and used "Slifer the Sky Dragon" in the Duel. However Yami managed to win the Duel via causing Marik to Deck Out and won the "Slifer" card through the tournament rules.[1][2][3] However, he refused to use it until Kaiba and Yugi convinced him to add the card to his Deck. 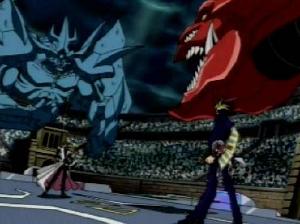 Slifer and Obelisk face off in Yami Yugi and Seto Kaiba's Duel.

Yami Yugi used "Slifer the Sky Dragon" in his semi-final Duel against Yami Bakura. Summoning it and attacking Yami Bakura became Yami Yugi's only way of winning the Duel. Marik exploited this, by having Yami Bakura remove his control over Bakura Ryou's body. Ryo, who was injured and significantly weaker than Yami Bakura, would not be able to withstand an attack from Slifer, making Yami Yugi reluctant to attack. However, Yami Bakura took back control of Ryo's body and urged him to attack, assuring him Ryo would be okay.[4]

During Yami Yugi and Kaiba's semi-final Duel, they got "Slifer the Sky Dragon" and "Obelisk the Tormentor" to battle. They were both destroyed when their ATK became equal, which caused Yami and Kaiba to see a vision of an ancient city. Here Slifer and Obelisk were turned to stone, while Priest Seto and Pharaoh Atem battled.[5]

In order to regain his memories, Yami Yugi presented the three Egyptian Gods to the stone tablet in the museum. However, the God cards began to crackle with dark energy as Dartz drained their power. Yami was then interrupted as Duel Monster spirits began appearing throughout the city. Later that day, Dartz's men broke into Kame Game and stole the God Cards.[6] Dartz placed the cards in the mouths of three stone serpents in order to use their power to summon the Great Leviathan.[7]

After defeating Dartz in a Duel, Yami retrieved the Egyptian God cards, though their strength had already been drained.[8] After Yami Yugi's soul had been absorbed into the Great Leviathan, the other souls Dartz had captured were able to lend him their strength. With it, Yami called out, "In the name of the Pharaoh, awaken!" and summoned the three Egyptian Gods. By summoning them, Yami was also able to free himself, Joey Wheeler and Seto Kaiba from the Leviathan. Slifer, Obelisk and Ra engaged in battle with the Great Leviathan. Empowered by the light of other people's souls, they defeated its main body.[9] However the Leviathan reappeared in a different form within Dartz, which Yami managed to defeat.[10]

Kaiba Dueled and defeated Pegasus to obtain a card capable of defeating the Egyptian God cards. Anubis added an extra card, "Pyramid of Light" to Kaiba's prize. Kaiba went on to face Yami Yugi in a Duel and used "Obligatory Summon" to force him to Summon the Egyptian God cards after Yugi Summoned "Slifer" and then activated "Pyramid of Light", removing the Gods from play. He planned to revive them against Yugi using "Return of the Different Dimension", but he was unable to before Anubis took over the Duel. Yami Yugi did so himself, combining the Gods to defeat Anubis.[11]

When Yami Yugi entered the World of Memories, he relived some of his life as Pharaoh Atem, and fought the battle against Thief Bakura, in which he summoned Slifer, again.

The Pharaoh used the three Egyptian Gods to battle Zorc Necrophades. However Zorc managed to overpower them and turn them into stone.[12] Upon relearning his name, Atem was able to Summon the three Gods again, this time from the cards in Yugi's Deck. He then combined them into Holactie the Creator of Light, who defeated Zorc.[13]

Yugi and Atem constructed separate Decks for the Battle Ritual, which Atem needed to lose in order to pass on to the afterlife. Despite needing to lose, Atem gave the Duel his all. He included the three Egyptian God cards in his Deck and managed to Summon the three of them at once in the Duel. Yugi was able to destroy them by using the "Lightning Blast" effect of "Slifer" against the Gods, and put himself in a position to win the Duel, but Atem revived Slifer with "Monster Reborn". However, Yugi had predicted that Atem would use "Monster Reborn", and he had sealed it off with "Gold Sarcophagus", preventing "Slifer's" revival and allowing him to win the Duel.

Jaden Yuki was sent back in time to Duel Yugi Muto. Towards the end of the Duel, Yugi switched to Yami Yugi, who Summoned "Slifer the Sky Dragon", stating that Jaden was worthy of having a god as his opponent.[14]