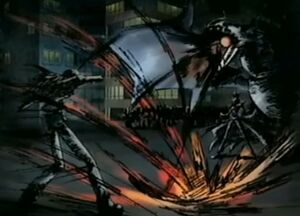 Gerard being defeated by Seto Kaiba.

Gerard, known in Japan as Kousuke Kunisaki (国崎康介 Kunisaki Kōsuke) is an undercover reporter who comes to Duel Academy to find information on the missing students in the Abandoned Dorm. Gerard disguises himself as a Slifer Red student and proceeds to wonder why students from other dorms will not speak to him and meets Jaden Yuki, Syrus Truesdale, and Chumley Huffington.

At the Slifer Red Dorm he has a slightly hard time with the food and Jaden occasionally referring him as "old timer." Gerard investigates the Abandoned Dorm only to find Alexis Rhodes there, who is paying her respects to her brother. She gets frustrated at him, and he leaves. During the Duel between Jaden and Bastion Misawa, Gerard hacks through the school's database and finds articles on students who had gone missing from the Abandoned Dorm. He takes the data hoping that it will give him good reviews while knowing that this information might also ruin the academy.

He then comes to watch Jaden and Bastion's Duel and after seeing his card "Skyscraper" and the two having fun while they Dueled, he decides that he only wants to help find the missing students from the Abandoned Dorm rather than getting information. During this duel, it was discovered that Gerard used to be a Duelist, but quit Dueling after he was defeated in a Duel against Seto Kaiba.

It is unknown if Gerard still has a Deck, but he is seen to be using "Skyscraper" in flashbacks, so it is likely that his original Deck was an "Elemental Hero" Deck.

In Yu-Gi-Oh! GX Duel Academy, Gerard is an available opponent while you are in Slifer Red or Ra Yellow, using a retro Deck composed of low Level Normal Monsters. He also triggers two events of the game.