Brron, Mad King of Dark World serves as the first main antagonist of the Dark World arc of the third season of Yu-Gi-Oh! GX. 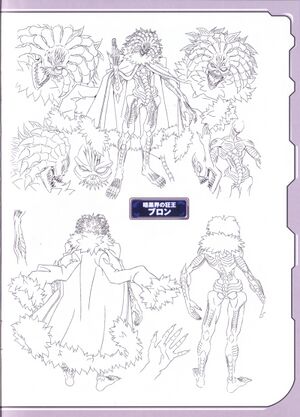 Being the leader of the Dark World creatures, Brron was responsible for the deplorable state of the second alternate dimension and oppression of its denizens. His right-hand man, Zure, oversaw Brron's will, detaining anyone who defied him in internment camps while killing duelists who could be threats to him. The executions occurred at his fortress and involved releasing monsters at disarmed duelists while Brron himself and his minions watched the spectacle. Demented and sadistic, Brron rules the alternate dimension as its vile dictator, and after learning of Jaden's presence in his domain, Brron orchestrated a plot that involved turning Jaden evil.

Due to an underhanded maneuver by his top subordinate, Zure, Brron had a clear advantage with his set of "Sinister Doctrine" cards because should one of them be activated one of Jaden's friends would be sacrificed. Eventually, Jaden defeated Brron in a fit of rage, but not before Alexis, Chazz, Atticus and Tyranno were all sacrificed. Only Syrus managed to avoid that fate. After his defeat, Brron mocked Jaden by saying that he would never see his friends again before dying. It was later revealed that Brron was simply one of Yubel's pawns, who used him to complete the integral part for her plan, the creation of the "Super Polymerization" card, and to simultaneously coax Jaden towards his descent into darkness (although it isn't stated how the two of them ever met, if they met at all).

In the dub, Brron's voice is high-pitched and he has a witch-like cackle to assert the fact that he is the insane king of Dark World.

Brron, Mad King of Dark World appears in the Darkness Duel World as part of the third Dark World Tag Team, with Reign-Beaux, Overlord of Dark World as his partner. After being defeated, Brron and Reign-Beaux are unlocked as Tag Duel opponents in Free Duel Mode.

Brron appears as an unlockable Single Duel opponent. He is unlocked when the player defeats Sekizato 5 times.

Brron plays a Dark World Deck, evil creatures whose latent abilities are activated when they are discarded by a card effect. He mainly focused on the gathering of the "Sinister Doctrine" cards which grants Brron access to his most powerful monster, "Colorless, Chaos King of Dark World", Summoned through the card, "Super Polymerization", although the Colorless card is not actually seen due to the fact that Brron could not offer Syrus through "Sinister Doctrine - Doubt". If the aforementioned strategy fails, Brron focuses on the Summoning and preservation of "Reign-Beaux, Overlord of Dark World". 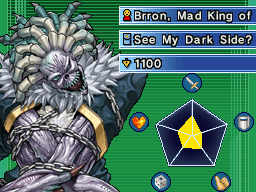