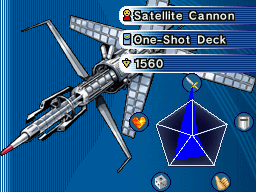 Satellite Cannon is a Level 6 Theme Duel opponent that challenges the player to defeat it during a duel in which the player inflicted at least 8000 points of damage with a single attack or card effect.

Satellite Cannon appears in the Darkness Duel World as a Tag Duel opponent, partnered with Metal Shooter. Their team name is Technology Master.