Dark Ruler Vandalgyon appears as a Theme Duelist who challenges the player to use 10 or more Counter Trap Cards during one Duel. 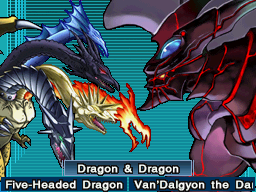 Van'Dalgyon in Reverse of Arcadia

Van'Dalgyon the Dark Dragon Lord appears as a Tag Duel opponent, partnered with Five-Headed Dragon as the Tag Team Dragon & Dragon. They are unlocked when the player summons "Five-Headed Dragon" during a Duel.