Horus the Black Flame Dragon LV8 is a character version of the card of the same name. 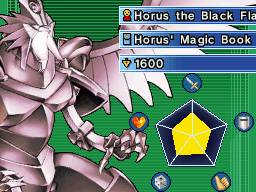 Horus is a Tag Duel opponent, partnered with White Night Dragon. Their Tag Team name is Water & Fire, and they are unlocked by finishing Chapter 5 in Story Mode. Beating them 3 times unlocks the Tag Team Child of Chaos.