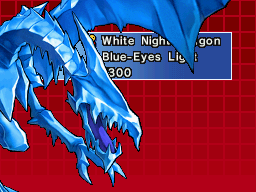 White Night Dragon appears in the Order Duel World, as one of the 5 opponents guarding the path to the final gate. It challenges the player to make it discard 10 cards from its hand and then defeat it in the same Duel. After clearing its challenge, White Night Dragon cannot be dueled again. 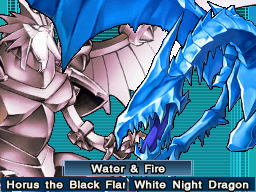 White Night Dragon appears as a Tag Duel opponent, partnered with Horus the Black Flame Dragon LV8. Their Tag Team name is Water & Fire, and it is unlocked by finishing Chapter 5 in Story Mode. Defeating them 3 times unlocks the Tag Team Child of Chaos.