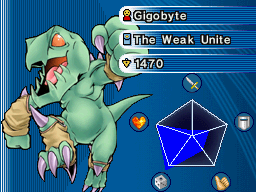 Gigobyte is a Level 6 Theme Duel opponent that challenges the player to defeat him during a duel in which the player activated "The Law of the Normal".

The player first runs into Gigobyte in the Grace Duel World, seeing it being bullied by Curse of Vampire. The player has to defeat the Vampire in a duel to drive him away. Gigobyte departs soon after, thanking the player.

Gigobyte is seen again in the Civilization Duel World as one of Kozaky's test subjects. The experiments involving the volcano's treasure transform Gigobyte into Giga Gagagigo and drive him insane.

Gigobyte does not duel the player in its original form at any point.