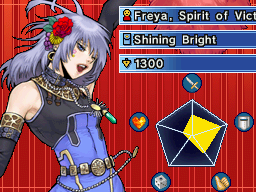 Freya, Spirit of Victory can be found in the Order Duel World. Defeating her 5 times unlocks Elemental Mistress Doriado as an opponent in Free Duel Mode.

Freya was a downloadable Ghost Duelist during May 2009.