In Yu-Gi-Oh! Duel Monsters, Jonouchi is a Level 1 opponent available from the start.

In Yu-Gi-Oh! Duel Monsters 5 EX 1 and Yu-Gi-Oh! The Eternal Duelist Soul, Joey is a Level 1 opponent available from the start.

In Yu-Gi-Oh! Duel Monsters 6 EX 2, Yu-Gi-Oh! Duel Monster International and Yu-Gi-Oh! Worldwide Edition: Stairway to the Destined Duel, Joey is an opponent available from the start. When the player defeats the Ghouls, Odion, Rare Hunter, Arkana, Strings, Lumis and Umbra, their leader, Marik Ishtar, will possess Tea Gardner and get her to lead the player to the pyramid. There the player must Duel Tea and Joey, who are possessed by Marik, two Ghouls and Marik himself, in order to free Tea.

In Yu-Gi-Oh! Duel Monsters 7: The Duelcity Legend and Yu-Gi-Oh! The Sacred Cards, Joey takes part in the Battle City tournament. He and Tea are both kidnapped by Marik. By threatening to kill Tea, Marik forces Yugi to Duel Joey, who has been brainwashed, in a death match. Yugi deliberately loses, but is rescued by the player. The player defeats Joey and helps free him from Marik's control, saving Yugi, Joey and Tea. Joey proceeds to the championship rounds afterwards. He defeats Odion, who poses as Marik, in and exposes him as not being Marik. Joey later loses to Yami Marik and is left in a coma, until the player defeats Marik.

In Yu-Gi-Oh! Duel Monsters EX 3 and Yu-Gi-Oh! World Championship Tournament 2004, Joey is a Level 3 opponent. The player can unlock him by defeating all Level 2 opponents, at least five times, and by having "Jinzo" in their trunk and not their Deck.

In Yu-Gi-Oh! Duel Monsters International 2 and Yu-Gi-Oh! 7 Trials to Glory: World Championship Tournament 2005, the player can Duel Joey at the card shop on Mondays and Saturdays, the K.C. Tower on Tuesdays and Wednesdays, the hometown on Thursdays and Fridays and the Coliseum on Sundays. Joey Duels the player at the K.C. Tower Tournament and in the Limitation Tournament, where the player cannot use Trap Cards. When the text "Where's Joey" appears on the screen, if the player talks to Joey, while they have "Time Wizard" in any of their Decks, Joey will challenge them to a Duel. In this Duel, each player has 2000 Life Points and use the same luck-based Decks. 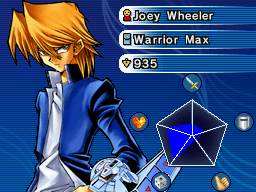 Joey can be unlocked as a Ghost opponent by connecting with Nightmare Troubadour. 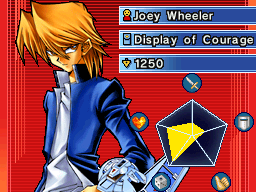 Joey appears in World Championship Mode for both Single Duels and Tag Duels.

Unlocking him as a Single Duel opponent needs the player to succesfully clear 6 Stone Monument challenges in Duel World.

His Tag Team with Yugi as the Yu-Jyo Team is unlocked when the player successfully resolves "Yu-Jo Friendship".