Vampire's Curse, referred to as Curse of Vampire in the American localization of Yu-Gi-Oh! World Championship 2008, is a character version of the card "Vampire's Curse".

Curse of Vampire can be found in the Grace Duel World after defeating every normal opponent in the area, where he will be bullying Gigobyte. He agrees to stop if the player beats him in a Duel, and will only duel them in the first place if the player bets a rare card.

By defeating him in Duel World, Curse of Vampire will be unlocked as an opponent in World Championship Mode. 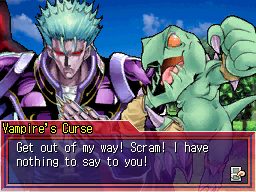