Exxod, Master of The Guard (character)

Guardian Exode is a Level 4 opponent.

Exxod, Master of The Guard appears as a Stone Monument opponent in the Sunlight Duel World, challenging the player to defeat it in a duel in which the player summoned its own card. Successfully doing so unlocks Marcel Bonaparte as an opponent in World Championship Mode. 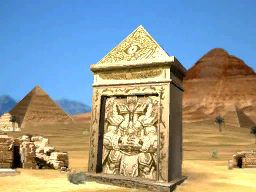