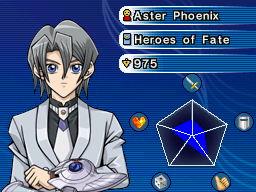 Aster appears in the game as a Ghost opponent who can be unlocked by connecting with Spirit Caller.

Aster is a Single Duel opponent in World Championship Mode, unlocked by finishing all challenges from Dark World Guardian - Gigori and Underworld Guardian - Moley in the Darkness Duel World.