Kaibaman, known in Japan as Ally of Justice Kaibaman, is a character version of the card, "Kaibaman", and a Duel Monster Spirit based on the character of Seto Kaiba. He is also the second opponent to have won against Jaden Yuki during the run of Yu-Gi-Oh! GX, the first being Zane Truesdale.

In the anime, it is thought that the card was created by Seto Kaiba, as a homage to himself. This is reflected in Kaibaman's appearance - his clothing greatly resembles that of Kaiba's during the Battle City tournament, and in both the English and Japanese versions of the anime, he shares Kaiba's voice actor. He also wears a helmet and Duel Disk modeled on a "Blue-Eyes White Dragon", and wears the same card pendant around his neck that Kaiba does. Kaibaman has long brown hair that is neatly arranged and trails past his waist.

Kaibaman lived in an area of the Duel Monsters Spirit World consisting of underground caverns. A portal to Earth appeared at Duel Academy's hot springs, which pulled Jaden Yuki, Syrus Truesdale, Chumley Huffington and Chazz Princeton into it, who were led there by Winged Kuriboh. He brought them there in order to test Jaden, who was doubting himself due to his battles with the Shadow Riders, where the lives of his friends were on the line. He had developed a fear of Shadow Duels as a result. Kaibaman challenged him, suggesting that he was a Shadow Rider and was thus initiating a Shadow Duel. Jaden nearly defeated Kaibaman, but Kaibaman used "De-Fusion" on "Blue-Eyes Ultimate Dragon", allowing him to counter and defeat Jaden. This aided Jaden in getting over his fear of losing and he left the spirit world with new confidence.[1] 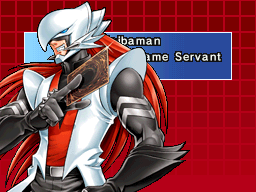 Kaibaman runs a "Blue-Eyes" Deck, based on the Deck of Seto Kaiba. His main strategy involves quickly Summoning the namesake of his Deck, "Blue-Eyes White Dragon", through several effects of cards such as "Kaibaman" and "Paladin of White Dragon".