Damon, known in Japan as Taira Taizan, is a former Obelisk Blue student who is obsessed with drawing. 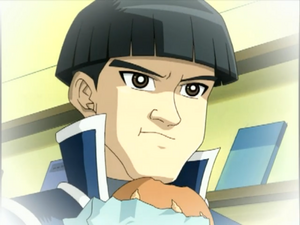 A flashback of a younger Damon.

Damon was an Obelisk Blue student who couldn't always obtain the card he wanted to draw, as shown when he drew "Fake Trap" while his opponent controlled "Jinzo". He eventually came to the conclusion that the answer to the "art of drawing" lay in nature, so he lived in the jungle to perfect his drawing technique. This, alongside survival training, gave him a wild-like appearance, clothed only what is left of the bottom half of his uniform. His survival training also left him extremely muscular.

He resurfaces sometime later in order to "draw" the right sandwich during a night raid. He ended up running afoul of Jaden Yuki and others, who chased him to a waterfall. Ms. Dorothy recognized him. He ended up Dueling Jaden by the waterfall. When it came to using "Miracle Draw" in an attempt to draw "Shield Crush" to destroy "Wroughtweiler", he guessed wrong. Damon was defeated by Jaden using "Elemental Hero Flame Wingman" and regressed back to a civilized state by the next day.[1]

Damon returns during the second year as one of the few Obelisk Blue students left untouched by the Society of Light. Retaining his wild appearance, he participates in one Duel of the Genex Tournament against Mathmatica and defeats him.[2]

Damon's character is based on Tarzan. In the English dub, Damon replaces the word "I" with "me" when referring to himself, to further the Tarzan homage.

In Yu-Gi-Oh! GX Duel Academy, Damon is an available opponent while you are in Obelisk Blue. He uses a draw Deck and triggers an event of the game. In this game, he has his young appearance.

Damon uses a Draw Deck. His strategy centers primarily on powering up his "Drawler" monster by returning cards from his hand to the bottom of his Deck, or inflicting damage through the effect of "Miracle Draw".