From Yugipedia
(Redirected from Deck)
Jump to: navigation, search 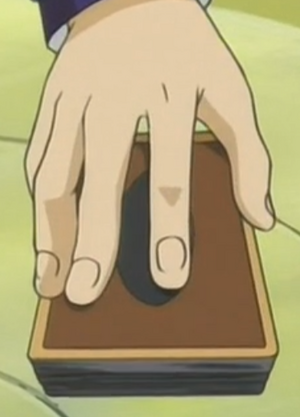 A Main Deck in the anime

The Main Deck (Japanese: メインのデッキ Mein no Dekki), usually simply referred to as the Deck (デッキ[note 1] Dekki), is a pile of cards that a Duelist can draw from during play. Each Duelist uses his or her own Main Deck in a Duel.

When constructing a Deck, Monster, Spell and Trap Cards are placed in the Main Deck. Fusion, Synchro, Xyz and Link Monsters are placed in the Extra Deck. If a player uses official Monster Token cards, these are to be stored in a separate location as well.

When a Duel begins, the Main Deck is placed face-down in the Deck Zone of the field. All cards in the Main Deck must remain face-down during the Duel (unless a card effect like "Convulsion of Nature" says otherwise). During a Duel, neither player may view the contents of either player's Deck unless a card effect allows them to, after which the Deck must be shuffled. Even if a card in the Deck is face-up, it cannot be looked at by either player unless it is on top of the Deck, in which case it is public knowledge.