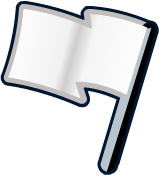 To surrender means to forfeit a Duel to the opponent, allowing them to automatically win the Duel.

Surrendering can be used strategically in a Match if it would not result in a Match loss. For example, if the player wants to conceal specific cards or their overall Deck theme from their opponent but is very unlikely to win from their current position, surrendering would prevent the possibility of the opponent finding out.

In most video games, in contrast to the official OCG and TCG rules, a player is only allowed to surrender the Duel during their own Main Phase. In some games, they cannot surrender until the 10th turn of the Duel or later. Usually, an AI opponent will never surrender, with the only known exception being the Yata-Garasu Lockdown. In some games, surrendering a Duel shows the player's LP becoming 0.

Players may concede a game at any point during a game or match, including during the opponent's turn. Once a match result is determined, the result is final and cannot be altered; it is too late for a player to concede.[1]

Players may not offer nor accept any form of compensation for conceding. Players who partake in bribery or collusion violate Konami policy and will be subject to penalties for Unsporting Conduct—Cheating.[1][2]

Players must clearly announce their intention to concede a game or match.

In the anime, a player surrenders by placing their hand over their Deck or Duel Disk. This has occurred ten times:

In the anime and manga, forfeiting occasionally shows the losing player's LP being reduced to 0, such as during the Duel between Marik and Yami Yugi.