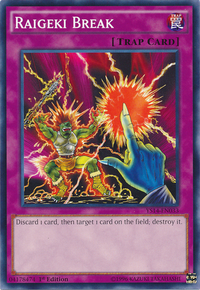 Targeting ( taishō, verb: とする taishō to suru) is the action of designating which specific cards are affected or used by card effects.

When activating a card or effect that targets, you must declare the target(s) before the effect is added to the chain. The target's location(s) are always specified, which can be the field, Graveyard, or banished cards. There are no cards that can target a card(s) in the hand, Main Deck, or Extra Deck.

While targeting usually allows the player to make choices, some cards that target do so without the player's input. Such cards include "Magic Cylinder", "Sakuretsu Armor", and "Dimensional Prison".

Cards that affect "all" cards (such as "Dark Hole", "Mirror Force", "Lightning Vortex" and "Heavy Storm") never target, because they affect as many cards as possible rather than the player choosing which cards will be affected and which cards will not, even if there is only one card that they will end up affecting. Likewise, "Fissure" and "Magical Dimension" do not target, because they select the monster to be affected when the effect is resolved, rather than when it is activated.

Most Counter Trap Cards do not target for the same reason - they respond to the card/effect that was activated before it, meaning there is no selection, thus no targeting.