From Yugipedia
Jump to: navigation, search
Not to be confused with "???". 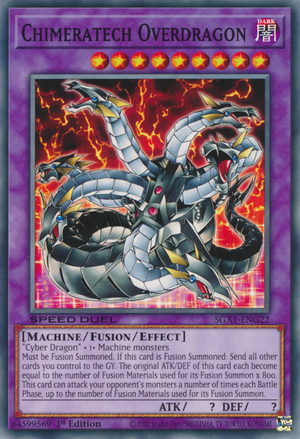 ? is a value used for a monster's original ATK and/or DEF to indicate that the value is undefined while not on the field. Less frequently, a value of ? can be used in some video games for other stats with an unknown value, such as a Monster Token's Type.

While on the field, an original ATK or DEF value of ? is always treated as 0. Almost all monsters that use such a value will have an effect that increases the relevant stat or sets it equal to some value. The only three exceptions are "Holactie the Creator of Light" (which automatically wins its controller the Duel when Special Summoned), "The Winged Dragon of Ra - Sphere Mode" (which cannot attack or be targeted for attacks), and "Number C1000: Numerounius" (whose stats are intended to be set by "Numeron Chaos Ritual").

While in the hand, Deck, or Graveyard, a monster with an ATK or DEF of ? cannot be searched or otherwise used by card effects that require a defined ATK or DEF, such as "Sangan", "Magician's Circle", "Limit Reverse", and "Skull Conductor". In addition, a monster whose ATK and DEF are both ? is not considered to have equal ATK and DEF while not on the field.