After watching the quick Duel between Yuma against Shark, Trey visits Yuma's house in order to learn more about him. He finds a picture of Yuma's parents, and starts thinking about how his family used to be. He becomes very upset and cries, then runs out of Yuma's house. Yuma goes after him, but then Trey gives him a map, and leaves.

At Vetrix's hideout, Vetrix, along with Quinton, is watching cartoons as Trey arrives, who wants to meet with Yuma. Trey believes that he and Quattro did not lose because of Kite, but because of Yuma. He also wonders how Yuma is able to Duel that way and wants to find that out with his own eyes. To Quinton's surprise, Vetrix allows Trey to meet Yuma.

Meanwhile, somewhere in Heartland City, Yuma is desperately searching for an opponent to Duel, first an old man, then a toddler, and then a cat. As he runs around everywhere to find someone, he runs into one Duelist who fell down on the street. He, Tori and Astral find out that the man was beaten by Shark. At that moment, they hear someone scream on the top of a construction plant. The three immediately run upstairs to find out what happened. There, they see how Shark cruelly beat another Duelist. Already on the ground are several more. Yuma asks him what he is doing but Shark simply acts like he does not hear Yuma. As Yuma keeps on asking Shark what happened to him, he responds that he is just fighting in the WDC and the only things that are moving him right now are hatred and revenge. In his opinion, even Yuma is his enemy. Then he tries to leave but Yuma challenges him to a Duel, which Shark accepts. Trey is on the balcony of a nearby building and looks on, remembering when he gave Shark "Number 32: Shark Drake".

In the first shown turn of the Duel, Shark has already Summoned two monsters and just attacked Yuma's "Gagaga Magician" with "Big Jaws" and then attacks directly with "Hammer Shark", but Yuma activates his face-down"Small Resistance". It allows him to select one monster from his Graveyard that has 1000 or less ATK and decrease the ATK of the attacking monster by that value. He chooses "Gagaga Girl". Shark continues his turn by overlaying his monsters to Xyz Summon "Submersible Carrier Aero Shark". He activates its effect, inflicting 400 damage for each card in Yuma's hand. Shark ends his turn, but Yuma simply Summons "Gogogo Giant" and ends his turn, much to Astral's surprise. He asks Yuma why he did not attack, but Yuma responds that it does not matter. Trey notices Yuma Duels just like he last time where he saw that Yuma Dueled differently from himself, who Duels with hatred and revenge in his mind. At the same time at Vetrix's hideout, Quinton asks Vetrix if it was okay to let Trey go, but Vetrix answers that it is okay because Trey is a kind child that will surely return just like he did in the past.

An unknown amount of time passes in the Duel. Shark Summons "Black Ray Lancer", which attacks "Gogogo Giant" and destroys it. Then he attacks directly with "Aero Shark". But Yuma is still willing to fight. He tells Shark to show him all he got and that he will not care if he wins or loses.

He asks Shark if he really hates him, he has to show him all of his hatred and bring on all his feelings. When the hatred disappears from his heart by that, Yuma will not mind because Shark used to be someone who loved Dueling more than anything else, but now it would seem like he even started hating Duels.

But then this heroic speech is interrupted because Yuma's stomach starts to growls. This makes Tori complain about Yuma's manners, but it also makes Shark smile and the darkness around him disappears. He quits the Duel and leaves. As he leaves, Tori and Astral tell Yuma it was wrong to challenge Shark to such a Duel because if Shark and him would have continued the Duel, Yuma would have lost all his "Numbers". Tori also remembers him of the promise he made with his father, but Yuma says that he is sure that his father would have done the same to save Shark.

Trey gets interested in Yuma's father, so he goes to Yuma's house and sneaks into the attic. There he find a photo of Yuma's parents which reminds him of his own family portrait. He looks up and realizes that he is surrounded by many ancient artifacts, but then suddenly Yuma's grandma comes in asking who he is. At that time Yuma is walking through Heartland City, trying to find an opponent, as he gets an phone call from his grandmother.

A little later, he runs into his room and gets angry as he identifies Trey's clothes, but then gets scared when Trey turns around because he is wearing an Aztec mask. Trey is amazed by all the things in Yuma's room and even knows from which culture and time he things are. 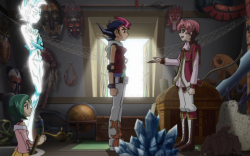 Yuma and Trey talk about their fathers

He tells them that he likes the mask he just wore the most because it reminds him of his favorite card. He explains that his "Chronomaly" Deck is focused around ancient civilizations and are connected to another dimension. His father researched this. Yuma excitingly tells him his father was also an adventurer. Suddenly he realizes that it is not the right time to talk about stuff like this because it is his family's fault that Hart got hurt. Becoming serious again, Trey bows in front of Yuma and apologizes for the incident, and asks him how he is able to Duel like that. Yuma is a little confused and does not know how to answer properly, but then says it is called kattobingu.

Then Kari shows up, saying lunch is ready and that Trey and Tori should also join them. Downstairs, they all sit down and eat together. Lilly even brewed tea. When Kari and Yuma start to fight about Yuma's Deck, Trey remembers one winter night when he was younger. He and Quattro were laughing while Quinton watched the snowfall. Trey showed Quattro the card he just got from their father: "Aztec Mask Golem". Quattro gets jealous because only his younger brother is getting something from their father and takes the card. Both of them start to fight about the card until Quinton tells them to be quiet, because their father does not like when they behave like that. Trey and Quattro sit down again and Quattro returns the card. Quinton comes to the sofa and promises he will teach them Dueling if they stay silent.

After remembering this Trey starts to cry and runs away. Yuma chases after him because he wants to know what Trey really feels. At the same place where Yuma Dueled Tombo one day ago, Trey stops. Yuma asks him what is wrong with him and why his family had to kidnap Hart, but Trey is really angry and challenges Yuma to a Duel, which Yuma accepts. Trey leaves and goes to Vetrix. He wants to get a new power from him. At Yuma's house, Astral wonders why Yuma wants to Duel Trey. Yuma answers he want to know Trey's real thoughts.

Shark's turn
An unknown amount of time is skipped.