"A Dubious Duo", known as "Yuma and Kaito - Tag Duel of Souls" in the Japanese version, is the forty-second episode of the Yu-Gi-Oh! ZEXAL anime. It first aired in Japan on February 6, 2012, and in the United States on December 15, 2012.

The Tag Duel of Yuma and Kite against Quattro and Trey begins! Kite duels essentially on his own, even to the extent of hurting all of his opponents, including Yuma. However, Yuma on his part, defends himself and Kite from Trey and Quattro's damaging combination. Furthermore, even with "Galaxy-Eyes Photon Dragon" being Summoned, it falls victim to Quattro and Trey's trap.

Vetrix's ritual to steal Hart's powers continues. Quinton guards them, while watching the Tag Duel between Kite Tenjo and Yuma Tsukumo versus Quattro and Trey with a screen in front of him (this is cut from the dub).

Quattro taunts Kite and Yuma, Yuma reacts to him, but Astral warns him to be careful with Quattro. Orbital 7, standing next to Tori Meadows, shouts to Yuma that he shouldn't hinder Kite. Tori gets angry at Orbital, making him show some fear of her.

Quattro takes the first turn of the Duel, playing "Egg Head". Using its effect, he deals Kite 800 points of damage. Yuma asks Kite if he's okay after taking the blast, but Kite replies he should mind his own business and worry about himself. Quattro then dramatically wonders how Hart is doing, to which Kite begins his turn. Kite starts brutally, activating his Field Spell, "Photon World". The surrounding area starts changing into a space void, probably resembling being on one of the asteroids that form the rings of Planet Saturn. Trey seems surprised, Quattro is still grinning, and Yuma is completely baffled. The latter, just like before, in Trey's Field Spell during the duel against Shark, thinks he's choking, being in a place where humans can't breathe, only to be reminded it's AR Vision by Astral. Kite continues his assault by playing a "Photon" monster, triggering the Field Spell, dealing 400 damage to everyone without a Photon monster. 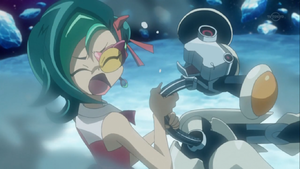 Yuma gets angry at Kite because of this, since he doesn't have any, meaning he would damage his own Tag Partner. Kite stays cool about it, saying he doesn't need Yuma's power. Meteorites rain down from above the foursome, and crash into Yuma, Quattro, and Trey. Tori shakes Orbital around in frustration.

Yuma gets upset about Kite damaging him, but Astral reminds him that they're here to save Hart. Quattro starts taunting Kite again, this time mentioning Dr. Faker and Mr. Heartland, and Kite's goal. Yuma flashes back to what Kite said after their last duel about selling his own soul to the devil for his brother, and puts the pieces together. Kite however stays calm and talks it off. Yuma thinks about helping Hart with their Numbers, but Astral reminds him he should focus on the Duel first. 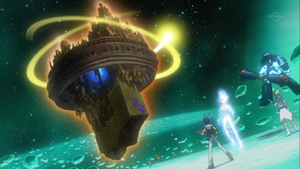 Trey takes his turn, having remained quiet during the other turns. He tells Quattro he's about to prepare the combo they've previously planned. He plays "Chronomaly Golden Jet" and "Chronomaly Moai", allowing him to Xyz Summon his real "Number" monster, "Number 33: Chronomaly Machu Mech". A purple Number-style 33 appears, and a giant city descends.

Yuma gazes at the huge Number in front of him, and Astral calmly shares his thoughts upon the structure with him. Yuma starts his turn, Summoning "Ganbara Knight" followed by "Kagetokage". He then creates an Overlay Network. Quattro, albeit sarcastic, says he's surprised seeing the opponent Summon an Xyz Monster in the first turn. Yuma Xyz Summons his own Number, "Number 39: Utopia". This time, Quattro is honestly surprised, along with Trey, seeing Yuma has a Number, and Quinton, who's watching, also gets interested. Even though Trey sees this as an extra reason for careful preparation, Quattro just bursts into laughter saying the battle just got more interesting.

Quattro draws and immediately continues his play by doubling his "Egg Head's" level to 8 through "Level Doubler", and reviving his other Puppet after banishing another. Overlaying them, Quattro calls forth his Number, "Number 15: Gimmick Puppet Giant Grinder". Tori flashes back to when the Number devoured Bronk and Caswell's "Tin Archduke" and "Antidote Nurse", remembering the devastating effect of the creature against Xyz Monsters. Trey activates his Continuous Trap Card, "Number Wall". Astral and Yuma are surprised by Trey pulling out a Number-specific support card. Quattro activates the effect of "Number 15", destroying "Utopia" and dealing Yuma 2500 points of damage, but he was ready and restores his Life Points through "Damage Mage". In order to make up for his failure in dealing damage to Yuma, Quattro activates a Spell and intends on using its powers with the effect of "Giant Grinder" to only be destroyed in battle by Numbers, to get rid of "Photon Crusher" and take 2000 Life Points out of Kite. Kite is blown away, but it is revealed to have been saved by Yuma's Trap Card. However, Kite isn't the least bit grateful. Tori expresses she thinks Kite could at least have been a little more grateful, and Orbital apologizes to her. Kite asks Yuma if it was Astral's plan to protect him, but Yuma responds it was his own choice to do so, and that he wants to help Hart, in order to fulfill the promise that Yuma made to him. Quattro however tells Yuma to shut up, angry at Yuma nullifying the effects of his moves and, with that, nullifying his "fan service" (in the dub, Quattro is angry because he lost attention from Yuma and Kite). 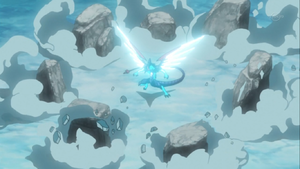 Seeing how he was unable to inflict pain to any of his opponents, Quattro decides to pop up a screen of Hart's condition, who's being drained of his power at the moment. Kite gets angered, and Quattro, playing right into his anger, says he probably wants his brother to hurry and save him. Trey expresses some sorrow, seemingly not fine with his brother's tactic. Quattro laughs about Kite's anger, but Kite doesn't see the fun in Quattro's "joke" and begins his turn, playing his 2100 ATK "Photon Thrasher", which triggers "Photon Pressure World," damaging the other 3 for 400 each. He Tributes "Thrasher" and "Crusher", and calls "Galaxy-Eyes Photon Dragon" in his anger. The field deals damage again, and "Galaxy-Eyes" attacks "Number 15". However, Quattro shouts that Kite fell for it, as Trey activates his face-down "Stonehenge Shield", trapping "Galaxy-Eyes", and reducing it's ATK to 0. The effect of "Number 33" activates, dealing damage to Kite equal to the amount of ATK "Galaxy-Eyes" lost, sending 3000 points to Kite.

Turn 2: Kite
Kite draws "Photon World" and subsequently activates it. Now, each time a "Photon" monster is Normal or Special Summoned, Kite can inflict damage all players who do not control a "Photon" monster equal to the Summoned monster's Level times 100. Kite Normal Summons "Photon Crusher" (

4/1300/1400) in Attack Position. He then activates "Chronomaly Resonance" to Special Summon "Chronomaly Moai" (

5/1800/1600) in Attack Position (as "Chronomaly Moai" is a "Chronomaly" monster that is one Level higher than "Chronomaly Golden Jet").

8/1500/2500; ORU: 2) in Attack Position. Trey activates his face-down "Number Wall", which will prevent "Number" monsters he controls from being destroyed by card effects.

Quattro activates the effect of "Gimmick Puppet Giant Grinder", detaching an Overlay Unit ("Gimmick Puppet Giant Grinder": 2 → 1 ORU) in order to destroy all other Xyz Monsters on the field and inflict damage to their controllers equal to their respective ATK. "Utopia" is destroyed (Yuma: 3600 → 1100 LP), but "Chronomaly Machu Mech" is not. As Yuma took damage from a card effect, he activates the effect of "Damage Mage" to Special Summon it (

Cut from the dub are the following: