"Heavy Metal", known as "Construction Site Duel! Demolish the Heavy-Machinery Deck!!" in the Japanese version, is the twenty-eighth episode of the Yu-Gi-Oh! ZEXAL anime. It first aired in Japan on October 24, 2011, and aired in the United States on September 8, 2012.

Yuma and Tori are running through a construction site. Tori questions him why they're there. (In the dub, they are rushing to a movie premiere, and Yuma wants to cut through the site as a shortcut.) Astral asks what it is where they are. When Tori and Yuma are arguing over why they're there, above them, the iron beams break, and fall down. Yuma rushes to Tori, when a shovel turns around and knocks the beams away. Yuma and Tori run as the machine rolls on right behind them. By jumping over an iron beam formation, the two manage to get into safety as the shovel crashes against the formation, shattering the glass at the front. They here a shout from it, and a little boy jumps out of it, trips, and falls. He sits down and moans about what happened, and Yuma asks who he is, while Astral comes closer by. Apparently feeling insulted, the boy introduces himself as Cody (or Shobee in the Japanese Version), referring to himself as ore-sama (Japanese Version only) (a boastful way to refer to oneself in Japanese).

Tori introduces herself and Yuma to him. She kindly thanks Cody for saving them, and the latter has to blush, but replies strongly. Astral looks interested at a bolt.

Yuma is amazed by a huge construction truck, and Cody explains what it is for. They then look at a crane, and Astral is intrigued by it. They talk about what they find of it. Cody mentions the World Duel Carnival, and Yuma tells him he is participating as well. They start arguing about whose Deck has the most power, and decide to find out with a duel. Yuma starts his dueling ritual, and their duel starts. 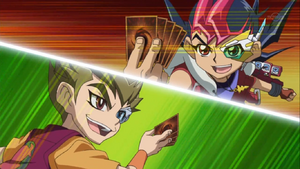 Cody starts the duel quickly by calling forth two of his Heavy Industry cards, Jumbo Drill, and Road Roller. Yuma counters using his Gagaga Magician. Astral questions him if he thought of Cody's monsters ATK and DEF being 2100. Yuma, embarrassed, is told by Astral to use the Equip Spell Card he's holding. Following Astral's advice, he equips "Gagaga Magician" with Bound Wand and activating "Gagaga"'s effect to raise its Level to 8 and thus its attack points to 2300. However, Cody's Trap Card turns the odds in the battle and destroys "Gagaga Magician," also knocking Yuma's LP down to 3200. Yuma is able to bring it back from the Graveyard with the effect of "Bound Wand," so he won't be wide open for direct attacks from Cody's monsters, summoning it in Defense Position on Astral's advice to prevent as much as possible Battle Damage next turn.

Cody remarks that this way Yuma won't defeat his "power". He draws and summons Strong Shovel Excavator in attack position, and the ATK of "Jumbo Drill" increases by 300 since there's now another Heavy Industry monster on his field. He has "Strong Shovel" attack "Gagaga Magician," but Yuma responds with Half Unbreak, so "Gagaga" can't be destroyed by battle this turn and damage to Yuma from battles involving it is halved. "Drill Jumbo" then attacks, which inflicts piercing damage. This damage is, however, halved by Half Unbreak, although Yuma's LP are still decreased to 2500. Although laughing at first, Cody gets embarrassed when his "Jumbo Drill" switches to defense position and can't be changed back until his next End Phase by other means then a card effect. Astral tells Yuma that this is their chance. Yuma confirms, and switches "Gagaga" to attack position and summons Mystical Donator. He uses its effect, lowering its attack to 0 and increasing "Gagaga"'s by 800 to 2300. He attacks and destroys "Strong Shovel" decreasing Cody's LP to 3500 and the ATK of "Jumbo Drill" by 300. Yuma sets a card and ends his turn, and "Gagaga Magician" and "Mystical Donator" regain their original attack power. Yuma remarks his "power" to which Astral makes a remark, which seems to stop Yuma's boasting. Cody complains about Yuma's remark. He flashes back to his younger days, in which he spent lots of time at a construction site, and was fascinated by the machines. He then tells his reason for participating in the WDC. 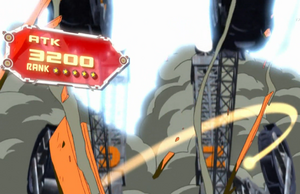 Cody begins his turn, using a powerful combo to regain his lost "Strong Shovel" and make his 3 monsters Level 5, and overlays them to Xyz Summon Digvorzhak, King of Heavy Industry, a massive construction machine with 3200 Attack Points. Cody introduces it to Yuma, and Astral tells Yuma how powerful this card is. He consumes an Overlay Unit from it to send the top three cards of Yuma's Deck to the Graveyard, which are Blustering Winds, Gogogo Golem and Goblindbergh. Since there were 2 monsters among the sent cards, two monsters on Yuma's field can be destroyed, so both "Mystical Donator" and "Gagaga Magician" are crushed. "Digvorzhak" starts making noise when Cody declares a direct attack with it, so Yuma can't hear Astral. By moving his hand, however, Astral manages to tell Yuma to activate the set Trap Card Small Resistance. By using "Small Resistance"'s effect, Yuma is able to lower "Digvorzhak"'s attack points to 2400, surviving with 100 LP.

Discouraged, Yuma looks at his hand. However, Astral uses what he learned about the construction site the last while, to tell Yuma "Digvorzhak" can be defeated. Yuma asks why he can hear Astral better than before which he says that they can speak telepathically. He compared it to the game of soccer he learned about during their last duel, he compares a duel to a construction. Yuma understands, and draws, while Cody asks if he already surrendered to his "power".

Yuma summons Kurivolt, and uses its effect to take away "Digvorzhak"'s Overlay Units, and summon two Kurivolt Tokens to his side of the field, shocking Cody, who quickly recovers and says the three little monsters are no threat. Yuma, however, disagrees by playing Mini-Guts, tributing two Level 1 monsters in order to decrease "Digvorzhak"'s attack points to 0. Cody first laughs at the Kurivolt Tokens attaching themselves to Digvorzhak, but all screws keeping it together soon fall out. He attacks it with "Kurivolt", and the little creature shocks the huge machine, making it fall apart, destroying it and inflicting 300 points of damage. Using Mini-Guts' second effect, Yuma deals Cody damage equal to "Digvorzhak"'s ATK (which is 3200), thus depleting Cody's remaining 3200 LP to 0, who is left in the smoke of the explosion.

Cody asks Yuma how he was able to overcome his power, and Yuma explains, making Cody realize it's not the only way to win. Cody understands, and keeping his cool, tosses Yuma his Heart Piece. Tori comes closer, and while the three talk, Astral flies all around the construction site, intrigued by it. Tori makes a remark, and both Yuma and Cody seem embarrassed.

A man suddenly screams at them, angry for the destruction they caused before and what they're doing there, the three run away yelling "Sorry!" (in the dub, the reason why the worker wants Cody and the others to leave is because his he doesn't want to see Cody's dad see him at the site). 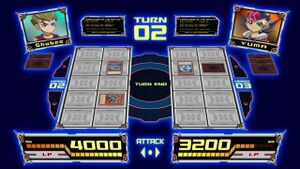 3 → 4). Cody then activates "Overhaul" to increase the Level of all Machine-Type monsters he controls by one ("Jumbo Drill", "Road Roller" and "Strong Shovel":

Cody activates the effect of "Digvorzhak", detaching an Overlay Unit ("Digvorzhak": 3 → 2 ORU) to send the top three cards of Yuma's Deck to the Graveyard. For each Monster Card sent, he may destroy one monster on Yuma's field. Yuma sends "Gogogo Golem", "Goblindbergh" and "Blustering Winds" from the top of his Deck to the Graveyard, so Cody destroys "Gagaga Magician" and "Mystical Donator". "Digvorzhak" attacks directly, but Yuma activates his face-down "Small Resistance" to target "Mystical Donator" from his Graveyard (as it's a Level 4 or below monster with at most 1000 ATK) and reduce the ATK of "Digvorzhak" by that of "Mystical Donator" ("Digvorzhak": 3200 → 2400 ATK). The direct attack continues (Yuma: 2500 → 100 LP). At the end of the Battle Phase, the effect of "Small Resistance" expires ("Digvorzhak": 2400 → 3200 ATK).

1/300/200) in Attack Position. Yuma then activates the effect of "Kurivolt" twice, detaching both of the Overlay Units from "Digvorzhak" ("Digvorzhak": 2 → 0 ORU) and Special Summoning two "Kurivolt Tokens" (