"Training Days, Part 2", known as "Certain-Kill Ninja Art! The Most Dreadful Ninja Appears" in the Japanese version, is the sixteenth episode of the Yu-Gi-Oh! ZEXAL anime. It first aired in Japan on July 25, 2011 and in the United States on March 24, 2012.

It's a Duel against Roku's former disciple, Kaze! Kaze draws his "Ninja" monsters, pinning Yuma down, but believing in the power of his friends, Yuma continues this battle even after Kaze Summons his Trump Card, "Number 12: Crimson Shadow Armor Ninja". However thanks to Roku and Astral, Yuma wins the Duel. 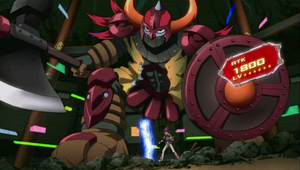 Turn 3: Yuma
Yuma draws "Dododo Warrior" and subsequently Normal Summons it in Attack Position via its own effect by decreasing its ATK by 500 (

Turn 5: Yuma
Yuma draws "Gagagabolt" and subsequently activates it to destroy "Blade Armor Ninja" (as he controls a "Gagaga" monster). "Gagaga Magician" attacks directly (Kaze: 4000 → 3250 LP). "Dododo Warrior" attacks directly. Due to the second effect of "Dododo Warrior", it is not affected by the effects of Kaze's cards when it attacks ("Dododo Warrior": 1150 → 2300 ATK). Kaze then activates the effect of "Aqua Armor Ninja" from his Graveyard, banishing it in order to negate the attack, however it doesn't work, so the attack continues (Kaze: 3250 → 950 LP). Yuma Sets a card.

As he controls no monsters and Yuma does, Kaze Special Summons "Earth Armor Ninja" (

5/1600/1200) from his hand in Attack Position via its own effect. Kaze then activates "Armor Ninjitsu Art of Revival" to revive "Flame Armor Ninja" (

4/1700/1000) in Attack Position (as it's a "Ninja" monster). Since "Flame Armor Ninja" was Special Summoned, Kaze activates its effect to increase its Level by one ("Flame":

Turn 7: Yuma
Yuma draws "Decrease" and subsequently activates it to target "Dododo Warrior" and reduce its Level by two until the End Phase ("Dododo Warrior":